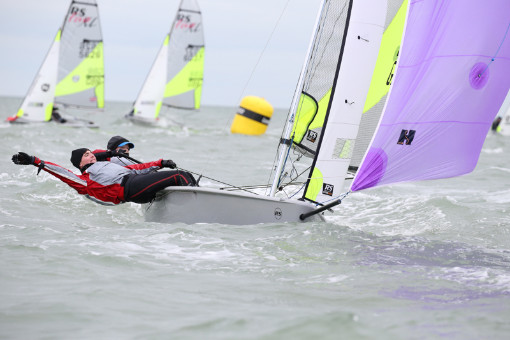 The season has started! The Spring Championships hosted by Hayling Island Sailing Club had a super turnout of 69 teams, this event previously named the “Hayling All Squads” weekend was an opportunity for sailors from across the country to come together after a winter of training and see who has come out of the winter training in the best shape! Not wishing to completely loose the training aspect of the weekend Coaches are also invited to be on the water to give their teams coaching, advice, tips and encouragement between races.

The sailors set to the water on Saturday morning, conditions a little grey with a bitter North Easterly wind blowing a consistent 10-12 knots. The long sail out to the course made for a good warm up for the sailors.

Race 1 saw Henry and Rupert Jameson from HISC over the line, after a dash back to cross over the line again they battled their way through the fleet to take the win with Freddie Peters and Louis Johnson HISC 2nd and Freddy Wood and Christopher Clarke HISC in 3rd.

Race 2 all clear at the start. Ossian Bracegirdle HISC and Josh Bonsey Northampton shot out of the pin end of the line, cleared the fleet and pulled away to gain an impressive win with Jack Miller and Lauren Bentley Felpham SC in 2nd and Michael and Samuel Dyer Herne Bay SC in 3rd.

Race 3 of the day was a little frustrating for sailors and race team. The tide was turning and so catching out many sailors at the start as they got pushed over the line, black flag deployed and 2 general recalls meant for an early finish for many teams. Ossian and Josh favouring the pin end of the line again spent their entire race at the top of the fleet and took race number 3 win, Dylan McPherson and Dylan Collingbourne of Burnham SC in 2nd and Freddy Wood and Christopher Clarke went over the line in 3rd.

Saturday night was a sociable affair with old friends and new catching up on a winter of news over a super 2 course dinner. Guest Speaker Elin Haf Davis told us all of her amazing adventures Rowing 2 oceans, Marathons, becoming a Doctor, starting her own business and so much more.

Sunday saw similar conditions to Saturday with a steady North Easterly and 10 – 12 knots of breeze but somehow feeling even colder than Saturday! Race 1 saw a new top 3. Michael and Samuel Dyer pulled away from the fleet to take the win with Pierce Harris and Alfie Cogger Windermere School in 2nd and top girls team Caitlin Webster RTYC and Niamh Davis Burnham SC in 3rd place.

Race 5 Freddie Peters and Louis Johnson read the conditions and sailed a great race to take the win Ossian and Josh in 2nd and Henry and Jamie Rastrick Yorkshire Dales/ Ripon in 3rd place.

The Spring Championships title went to Dylan McPherson and Dyaln Collingbourne of Burnham Sailing Club, Ossian Bracegirdle and Josh Bonsey in 2nd and Henry and Rupert Jameson in 3rd. First girls went to Caitlin Webster and Niamh Davies and a special award went to Sandy Bailey and Jack Francis from Exe SC for perseverance.

Ambassadors Adam Freeman-Pask and Sophie Mear from one of our fabulous Sponsors PA Consulting spent the day on the water watching the action, during the prize giving sailors and their family’s heard about their work with PA Consulting and PA Consulting’s connection with Team BAR they also announced the PA Consulting win a spinnaker competition as open and invited competitors to take part.

RS Feva Class Association Committee member Nick Neve thanked the Principle Race Officer David Nicholls and his team, Safety Leader David Pennant and his team as well as the entire crew at Hayling Island Sailing Club who hosted a superb weekend. Next Class Association run event will be the 3rd in the current Grand Prix series at Northampton Sailing Club on 16th and 17th April entry is open – http://www.rsfeva.org.uk/champs/cindex.asp?eid=98

To be in with a chance to win a Spinnaker to use at the RS Feva National Championships and World Championships enter the competition here- http://www.paconsulting.com/events/rs-feva-partnership/