Racing was postponed whilst the Race Officer waited for wind but eventually, the fleet got away after an AP start; then after a general recall, the fleet started under a black flag with 3 boats caught out. At the first windward mark, Rory Odell and Josh Bonsey led the fleet followed by Daniel Lewis and Tristan Payne, with Jack Lewis and Lucas Marshall in 3rd. These positions held to the finish.

The Race Officer was quick to get into sequence for race 2 and went straight into black as the wind increased to a steady 6.5 knots. Again Rory and Josh were in front, followed by Fin and Dan Armstrong,with Henry and Rupert Jameson in 3rd, as the wind increased to 8 knots. By the gate, Rory and Josh had a healthy lead, 2nd Fin and Dan, whilst Daniel and Tristan moved up to 3rd. By the 2nd windward mark Rory and Josh were just ahead of Jack and Lucas and they stayed 1st and 2nd to the finish, whilst Dan and Tristan held 3rd.

The Race Officer held off from resetting the course as the wind dropped further. Eventually, as the sun came out, the wind came back in, and race 5 got away after an hour of waiting. 5 knots across the course and the fleet got away all clear. Leading the fleet were Daniel and Tristan, 2nd Iain and Jake whilst India Edwards and Fin Maciver were in 3rd. Iain and Jake took the gun, 2nd Daniel and Tristan, 3rd Rory and Josh which was enough to secure victory. 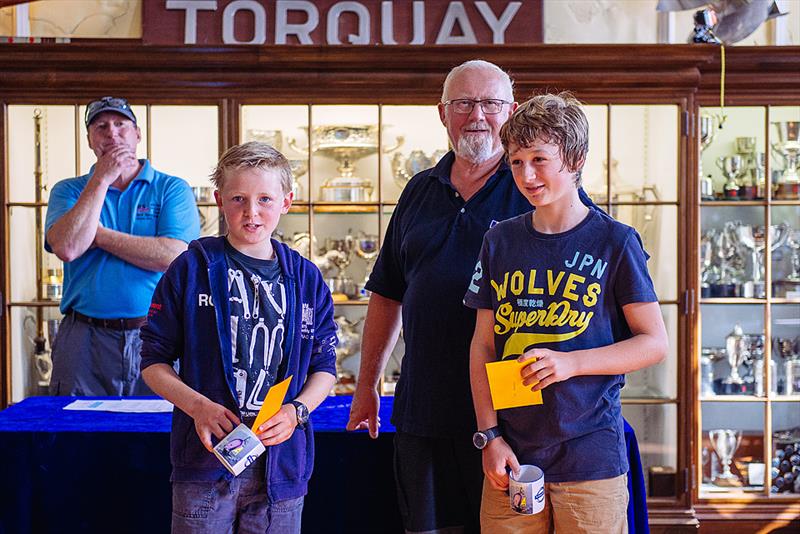 Jean Border took some photo’s last weekend at Torquay which you can order through her website. Take a look at www.borderphotos2010.com