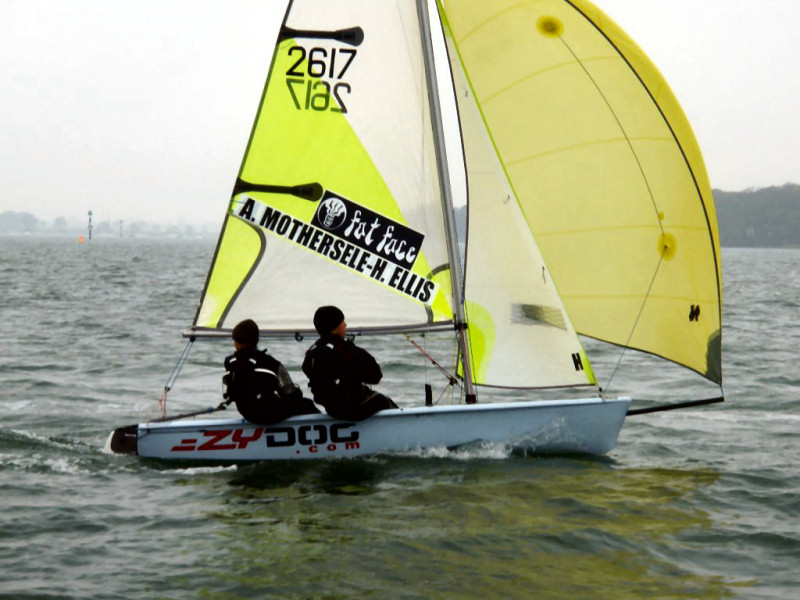 The forecast and actual weather on Saturday, April 19th, were both poor; a strong north-easterly with rain squalls, but nonetheless fifteen Fevas went afloat for their Class Open at Chichester, and had close, hard and well-mannered racing – though after a general recall all the starts were under the black flag!

Alex Mothersele and Hamish Ellis from Emsworth won the first race, but had to content themselves with second place in the two other races, which were both won by one of the seven all-girl crews in the fleet : Alice Kent and Lucy Childs in Race 2, and Eilidh McIntyre and Cassia Roberts in Race 3. However, Mothersele and Ellis won overall with a three-point lead, with all three races counted. Second in Race 1 were Hugo Jones-Warner and Vikki Payne, who were third overall.

Best of the local sailors were sisters Alex and Stephi Orton, with a third, fifth and sixth places to take sixth place overall. Abbie Page and Rosie Hickman, moving out of Oppies to sail together for the first time displayed enormous enthusiasm and were rewarded with a special prize, as were Toby Hodge and James Stupple for their perseverance in finishing all three races.