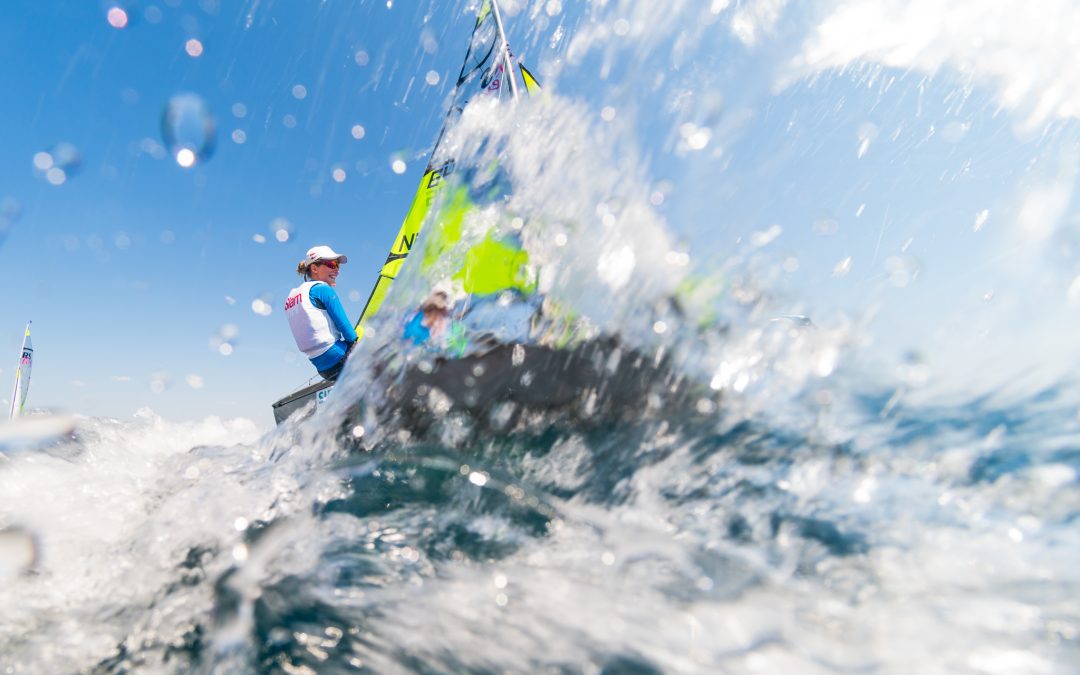 A small but select group of Feva sailors gathered at Felpham SC on the morning of Sunday, 15th May undeterred by a distinctly unpromising forecast all week of overcast, very light and variable winds. In the event, on the previous day, surely the first South coast sea-breeze of the year had filled in beautifully to about 15 or more knots, and Sunday dawned sunny, with a rather more promising forecast – W 10-13 knots. No one, however, could have anticipated the champagne sailing conditions that materialised…..

Following a very friendly briefing from PRO Tom, and having helped launch committee and rescue boats, the fleet then launched themselves into a perfect 10-12 knot Westerly and last of the ebb tide running west. Leaders round the first mark were Louis Wright & Jamie Allen from HISC, hotly pursued by Charles Elliott & Ethan Miles also from HISC, and then Toby Mizzi & Tom Callan from Littleton SC. Charles & Ethan faster and deeper got overlapped inside Louis & Jamie, who gybed off for looking for more wind. On the subsequent round, Charles & Ethan maintained their lead, and Tom & Toby passed Louis & Jamie, who on the final downwind fought back but only briefly into 2nd, thus Charles and Ethan took an assured win, 2nd Tom & Toby, 3rd Louis & Jamie, and 4th Freddy Wood and Christopher Clark from HISC.

With the wind backing to SW and building to 18 or so knots  Race 2 started, and Wright & Allen led again round the first mark, but this time held on to their lead and extended to seal a win, followed by Race 1 winners Charles & Ethan, then Toby & Tom, followed by local heroes, Jack Miller & Lauren Bentley, not showing quite their usual form.

In civilised style the fleet then came ashore for lunch, included in the entry fee, allowing the wind to build further to 20 knots plus, and feel colder. It was all too much for the FSC club sailors who largely packed-up, but those who stayed watched enviously as the tenacious Feva sailors headed out for another 2 races. The bit firmly between their teeth, Louis & Jamie won race 3, taking few risks and sailing fast. Charles & Ethan were second again in race 3 leading the 2 leading teams on equal points. Third were the steadily improving Jack & Lauren, and 4th Toby & Tom. The wind was now well into the low 20 knots, and the FSC Feva sailors in club boats who had enjoyed the previous day’s training were doing extremely well to stick with it. Capsizes were increasing as sailors began to tire, and cold began to be a factor possibly leading to at least one retirement. A slightly depleted fleet completed the final race, flying downwind in fabulous sailing conditions, another bullet for Louis & Jamie secured then meeting, Jack & Lauren second, and the ever-present Toby & Tom third. Prizes were presented with a backdrop of video footage from the morning’s racing that can be seen on RS Feva UK Class Assoc. Facebook page. Jamie made a brief speech thanking the race officer, club, catering ladies, competitors and his helm.