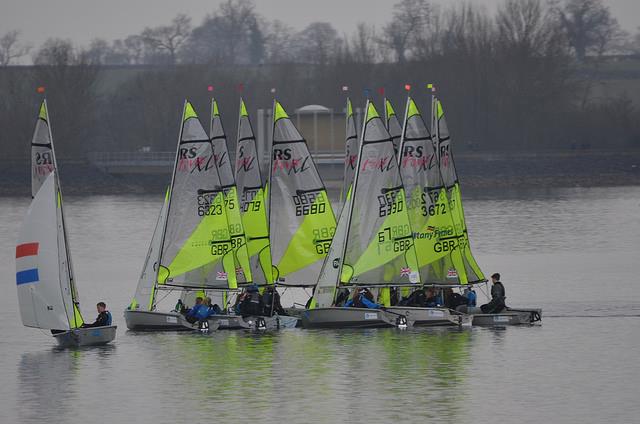 Draycote Water Sailing Club played host to the RS Feva class for the RS Feva Inland Championships. The forecast was set to be a challenge with fairly decent conditions for Saturday but very light for Sunday. PRO Ally Jones briefed the fleet and set to the water to complete as many races as possible in 1 day taking the heat off for the Sunday given the forecast and taking full advantage of the superb sunshine but light wind!

Race 1 and the fleet all behaved on the start line with all clear. The middle of the fleet suffered from lack of clear air and there was many a melee on the marks! It was Sian Talbot and Elouise Clapson McBride from Leigh and Lowton SC who read the shifts and found the right part of the course on every leg who took the win, Pierce Harris and Alfie Cogger Windermere School followed in 2nd and Matt Taylor and Will Carron from Brightlingsea and Burnham Squiddies in 3rd

The final race before a break for lunch and luckily, we still had a gentle breeze. Blake Wilson Southport Yacht Club Australia and Sam Dickinson from Hayling Island Sailing club recovered from their black flag in race 2 to take the win, Ewan Wilson and Teddy Ferguson came in 2nd and National Champion Ben Hutton Penman with a crew Abi Jayasekara from Corinthian Otters came in 3rd.

After a break for lunch the sailors headed out again and PRO Ally Jones had every intention to try and get in as many races as possible, the fleet a little over keen on the black flag start with 10 boats being called over the line and therefore sitting out of the race.

New faces at the front but not to the fleet showing their winter of training has really paid off was Quinn Edmonds and Fin Oliver of Chew Valley Lake SC, 2nd Jamie Rastrick and Madeline Bristow Yorkshire Dales SC and 3rd Matt Taylor and Will Carron.

Final race for the day and another 6 black flags! Ewan Wilson and Teddy Ferguson finish the day with a 1st, Pierce Harris and Alfie Cogger in 2nd and a great recovery from the black flag disqualification in race 4 for Freddy Wood and Phoebe Peters finishing in 3rd

RS Feva Vice Chairman Ian Jameson thanked the Draycote SC team for all their support to the class and hard work to help make the event a success, Principal Race Officer Ally Jones and his race team and all the competitors and their families and supporters for attending the event