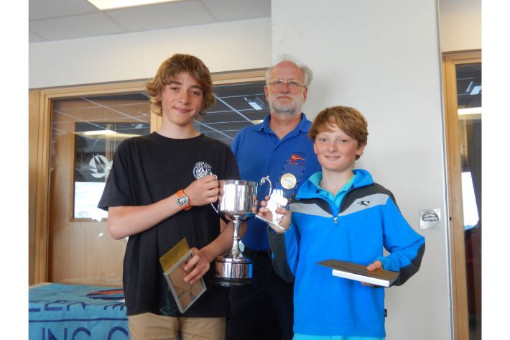 Queen Mary Sailing Club played host to the Magic Marine Inland Championships over the weekend of 25/26 June. With 70 teams from across the country, it was set to be a great weekend.

Weather conditions proved a real challenge yet again for our RS Feva Sailors and their race team with the wind shifting frequently. Consistency was key!

A quick break to proceedings to wait for a storm to go through. Once the storm had passed sailors headed back out for race 2. Norfolk Broads YC William Pank and crew Hayling Islands Sailing Club Fin Dickinson took the win followed by Hayling Island Sailing Club Henry Chandler and Louis Johnson in 2nd and the Pye brothers from Draycote SC in 3rd.

Race 3 and Henry Chandler and Louis Johnson finished the day with a win to put them in first overall overnight, Tom Storey and Caitlin Webster from Yorkshire Dales and Royal Torbay YC came in 2nd and Matt Taylor and Will Carron from Brightlingsea SC came in 3rd place.

Sunday’s forecast gave a little more wind that was due to increase throughout the day, but similar to Saturday with constantly shifting winds.

Race 5 saw the Pye Brothers lead the way to take the win, William Pank and Fin Dickinson in 2nd and Chris James and James Hall from Hayling Island Sailing Club in 3rd

The final race of the day saw Jack Lewis and Lucas Marshall take the win followed by Rupert Jameson and Ossian Bracegirdle from Hayling Island Sailing Club and Ellen Morley and Sophie Jonson took their second 3rd place of the day.

The Inland Championship title was awarded to William Pank and Fin Dickinson. Just 1 point behind  Matt Taylor and Will Carron and brothers Henry and Jamie Rastrick in 3rd place overall