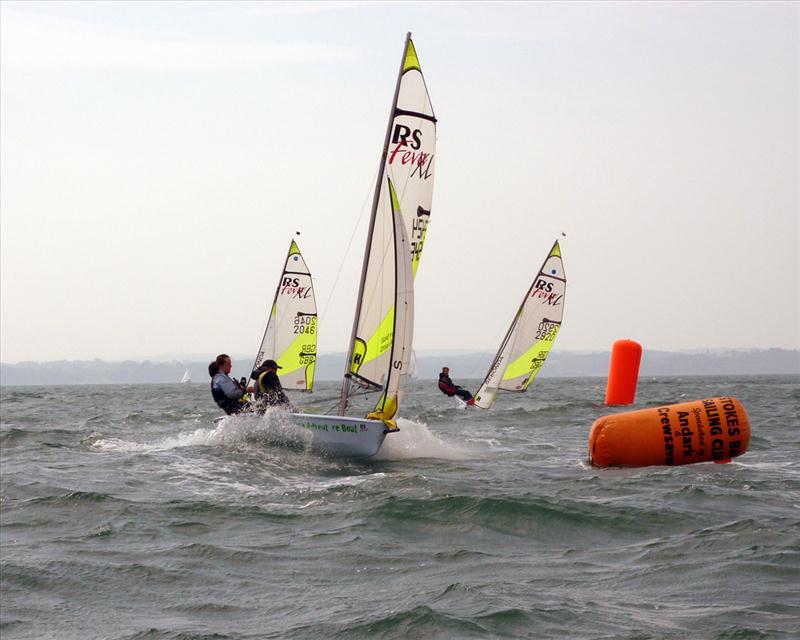 A new racing season is up and running – and how! The RS Fevas do their season as per the school calendar year so that those moving in and out of the class can get a full GP series under the belt and qualify for the prizes! The GP at Stokes Bay, sponsored by Ronstan, certainly looked good with wind, waves and perhaps the emergence of a new pecking order?

Saturday was almost exactly as per the forecast but with perhaps a steady 3kts more than forecast. That gave a hard work day with an average 12kts just 8 miles or so from where the Lasers were having their dramas at their worlds. Tight racing between Jovian Short & James Barlow, Owen Bowerman & Charlie Darling , Morgan Peach & Herbie Harford plus new pairing Robert & Alice Masterman meant that scores were tight. A pretty good night’s sleep was had by most as a result after 3 tough races. Some slept better than others having developed a good temperature over the course of the day!

Forecast was that it would be a little windier than Saturday but much the same direction – NE. First race would allow the discards to kick in.

Pre-launch good news for the Oliver boys was that the Jury had given them redress for Saturday’s last race when they got t-boned and holed.

So all on and the wind was indeed building. Having said that it then also softened in the middle of the first 3 lap race. Bowerman and Darling looked to have found their sailing boots again and quickly established a nice lead. The Royal Torbay crowd had other ideas and after some intensive training recently at home they displayed their newfound expertise to very sharp effect. Short and Barlow gradually reeled them in and then shot off. Peach and Harford weren’t letting someone else from home have it all their own way -after all they have been Torquay’s toast for some time now. A gust at the bottom of the final reach ensured a photo finish. Short & Barlow taking first with Peach & Harford 2nd whilst Tom & Debbie Darling (Debbie stepping in at the last minute) screamed through to take 3rd.

At this point whilst nobody knew it at the time Jovian & James didn’t actually need to complete the next race as they had won already. This wasn’t known as nobody knew that there would ultimately only be 5 races overall. So what Jovian & James did was to show great speed up the second beat to establish a clear lead and then with formidable style kept in the gusts (which had built considerably now) and scooted home in plumes of spray. Meanwhile, and I’m not sure quite how they did it, Morgan & Herbie recovered from an abysmal first beat to overtake boats not in ones and twos but whole fistfuls to round the last windward mark in 3rd and then just fizzed along to nab another 2nd.

Package of the day – well the weekend to be honest, were Ben & Tom Oliver whose worst counting result was a 5th!

Ronstan were very generous with their prizes and the Spot Prizes went to: Ruby Griffin & Harriet Winbush, Jordan & Benjamin Cook, and as top Stokes Bay boat in their first regatta together and 10th overall – Joshua Belben & Freddy Clampett. Stokes Bay were as ever first class in their hospitality and organisation. Next event – RYA Zone champs and then the 2nd NJS/CNS qualifier at the beginning of October at Queen Mary.