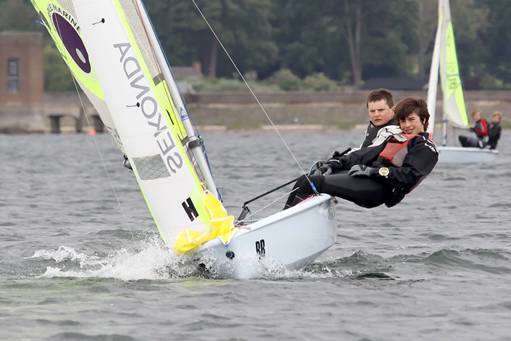 The 2010 RS Feva Inland Championship was hosted by Northampton Sailing Club on June 19/20. The 43 Fevas joined 9 RS 600s & 11 RS Vareos on a trapezoid course with the Fevas doing the inner loop. It worked perfectly with all three fleets enjoying fantastic close racing.

After a short tea break the boats returned to the race track to slightly lighter 8 to 15 knot breezes. The fleet had cottoned on to the port biased line & with many of the top boats fighting for pole position it was Matt & Gareth who stole the start whilst many others had to dig deep to return from bad positions. Again the racing was incredibly tight. In the end Matt & Gareth held on from Rob & Rebecca Morris with Ruth & Tess Allan in 3rd.

Sunday dawned brighter & lighter. Again the wind proved tricky but with even bigger ‘holes’ than the previous day. The game of ‘snakes & ladders’ recommenced. Debbie & Tom again secured the pin on the port biased line & sailed away from the fleet eventually winning by half a leg. Light weather experts Morgan Peach & Herbie Harford showed their speed by comfortably taking 2nd from the pack behind led by Cathy & Francine. Race 5 was played out in winds dropping to 3 knots then back up to 8 knots again a test of nerves which Debbie & Tom reveled in, securing their 2nd win of the day from Cathy & Francine then Ruth & Tess Allan.

The points were close leading into the last race but Matt & Gareth pulled out all the stops to sail a good race & take the win. Unfortunately for them Debbie & Tom gradually picked their way through from 6th to 2nd just sneaking past Rob & Emma at the final mark to take first overall. Matt & Gareth won the Junior Inland Championship Trophy.