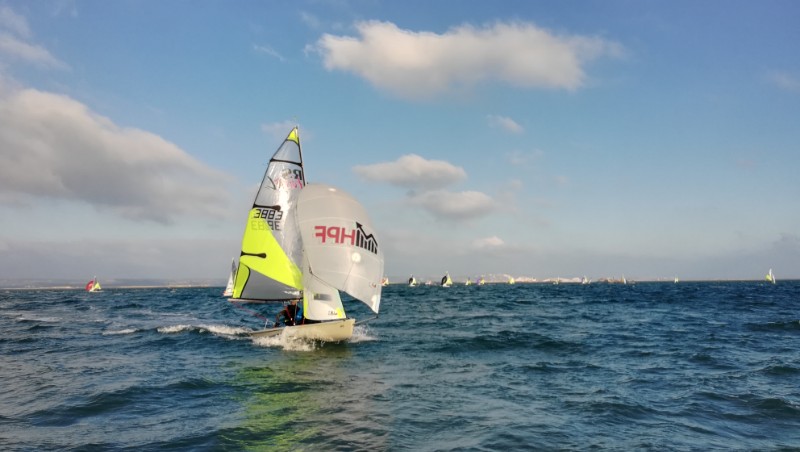 Raulf Berry paired with another helm Ralph Nevile for the first time and they really showed the fleet how it should be done with 4 bullets in a row to claim the title.

Saturday saw a good breeze from the East with 16 gusting 20 knots, with the addition of light rain it made for a very wet day.

Race 1 got underway with new kids on the Feva block Joey Taylor & Terry Hacker from the Oppie Class leading with Martin Jones crewed by his daughter in 2nd and Quinn Edmonds and Finn Oliver 3rd.  Unfortunately for these 3 teams, their 1st, 2nd and 3rd was not to be as all had been caught out with the black flag and the race was won by brothers Blake & Brett Tudor, Raulf & Ralph second and the Frensham Pond pairing of Tom Alheid and Tom Stratton Brown 3rd.

Race 2 and Blake & Brett Tudors boat speed pulled them from 3rd on lap 1 to 1st over the line. Joey Taylor & Terry Hacker sailed another excellent race to claim 2nd and Quinn and Finn from Chew Valley 3rd.

Race 3 saw and the weather started to really deteriorate, the race officer and his team did a great job of turning the next race around and started the fleet in approaching 20 knots of wind. Raulf and Ralph hit the right-hand corner and lucked in with a great starboard tack lift to give them a huge lead at mark 1 which they held to the finish with ease. Blake and Brett capped off a great day with a 3rd and the very consistent Alice Davis and Abbey Hire 2nd.

Day 2 the breeze was up but the sky was blue and after a short postponement, the fleet headed out in a steady 20 knots gusting 25. The quality of the fleet showed through as most of the fleet relished the conditions. After a recalled start the fleet got underway and a big left-hander gave those who went that way a healthy lead, Sam Baker & Arran Holman plus Tom Alheid & Tom Stratton Brown were among them and they finished 2nd and 3rd respectively. However, neither could hang on to the pace of Raulf & Ralph who came through to win.

Race 5 was again a Raulf & Ralph show as they lead from start to finish followed by Joey & Terry and Alice & Abbey who were looking a shoe-in for the girl’s title.

Race 6 was a very tight race with places changing constantly, the improving pairing of Henry Hallam & Ashley Hill from St Mawes SC made the trip worthwhile to post a 2nd their best result by some way of the weekend but despite a great deal of effort down the last leg they couldn’t get the better of Raulf & Ralph who won again. 3rd was Oliver & Matthew Rayner from Yorkshire Dales who sailed a fantastic last leg to go from 7th to 3rd.

A great closing event for the RS Feva Class, lots of new faces and very exciting times ahead. Well done everyone for making it a great championship and of course sailing in true RS Feva Spirit.