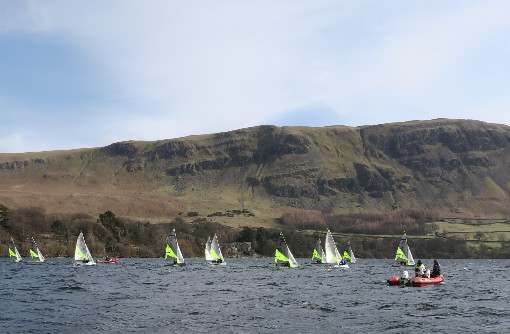 Competitors in the Easter Regatta at Ullswater Yacht Club were rewarded for their patience when they finally got on the water on Easter Monday after two days of stormy weather led to the cancellation of all racing.

The three-day event with seven races turned into just one day of racing when the wind finally eased and the sun actually came out. The club welcomed visitors from the RS Feva class who had the advantage of making the most of the perfect sailing conditions on Good Friday with a training day. Budding young racers in 13 boats from all over the North took part in a full day of intensive training by RYA coaches.

Then Storm Katie arrived and the fierce winds led to the cancellation of the scheduled racing on Saturday and Sunday. The RS Feva youngsters coped with the delay in good spirits and were rigged and ready for the racing on Easter Monday in fresh and gusting westerly winds, despite a distinct drop in temperature with overnight snow covering the hills.

Race officer John Robson and his team got the fleet off to an early start and the Fevas completed four short windward/leeward races before the lunch break. Competition was close in the challenging conditions and there were four different race winners  – Tom Storey and Oliver Kent of Yorkshire Dales SC/Ripon SC in race one, Pierce Harris and Alfie Cogger of Windermere School in race two, Ewan Wilson and Fin McGhie of Wormit Boating Club in race three and Henry and Jamie Rastrick also of YDSC/RSC in race four.

The event was still up for grabs when the racers went out for the fifth race of the day, this time on a longer, figure-of-eight course, in increasingly gusty wind conditions. The Rastrick brothers took first place, winning the event, with Harris/Cogger coming second overall and Wilson/McGhie third.

Two other fleets were racing in the Easter Regatta – fast and slow handicap. They took part in three windward leeward races and one longer race on Monday. The slow handicap fleet had 16 entries, including five RS Aeros and the overall winner was Aero sailor Harry Jones from Draycote SC with Dave and Sue Giles of UYC in a Flying Fifteen second and Ed and Ellen Storey from Ripon SC in a National 12, third. In the fast handicap fleet, UYC 49er sailors won two of the four races to take the event overall. Club members David and Edmund Clarke were second overall in a VX One and Graham Priestley in a Musto Skiff was third.

Special thanks goes to race officer John Robson and his team who managed to run a successful event despite having the weather gods against them. They held a total of 13 races in one day and even ran two separate start sequences for the racing – 5-4-1 for the Fevas in training for national events, and the club’s own set-up based on three minute intervals for the rest of the regatta racers.