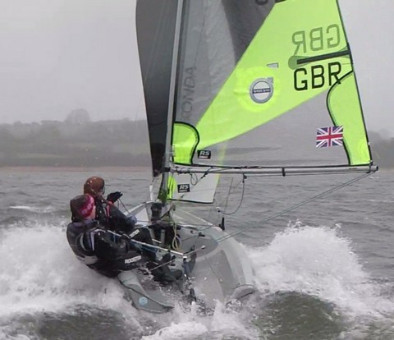 Thirty-six young & enthusiastic RS Feva sailors descended on Chew Valley Lake Sailing Club for the third instalment in the winter training series here in the South West. The sailors & their families travelled from all over to attend a fun & action packed weekend. Wind forecasts were telling us that we would be greeted with very gusty conditions, perfect for practicing boat handling. High quality coaching was again provided by Bex Partridge & Charlie Makepeace, who between them came up with a great programme of exercises, drills & discussions to enhance the sailors knowledge.

Saturday – a moderate westerly breeze gave a great opportunity for the coaches to split the groups up initially and work on specific areas according to experience level, all coming together at the end of the morning session for an 18 boat fleet race, which was a great spectacle for all involved. In the afternoon a handful of ‘Pairs Races’ were run which allowed the squad sailors to help & mentor the newer sailors around the race course, an exercise that will help massively with the development of the fleet. It’s so refreshing to see everyone talking to each other sharing their knowledge and experience.

Sunday – with the breeze ranging from 18knts to gusts in excess of 35knts, this made for an exciting, action packed day, The coaches did an absolutely amazing job keeping the fleet together, using the same training exercise for everybody but with variations for the different levels of ability. Inevitability the weather clamped in and the conditions proved very difficult for most, resulting in lots of capsizes followed by an early lunch & debrief. The breeze increased further over lunchtime leading to the decision to take just the four most experienced boats back on to the water with Charlie for some more boat handling work whilst the remainder kept warm in the classroom and did some valuable theory work with Bex.

All in all a brilliant weekend was had by all, I was extremely impressed with the quality of sailing from everyone in some very challenging conditions, good luck to you all for the upcoming events. Finally a big thank you to Nick Edmonds and all at Chew Valley for playing fantastic hosts, thanks must also go to the parents who work tirelessly both on & off the water, well done and thank you to the coaches who kept everyone involved with brilliant training sessions. Last but not least a huge thank you to Sally who has the never ending task of organising these events with such ease.