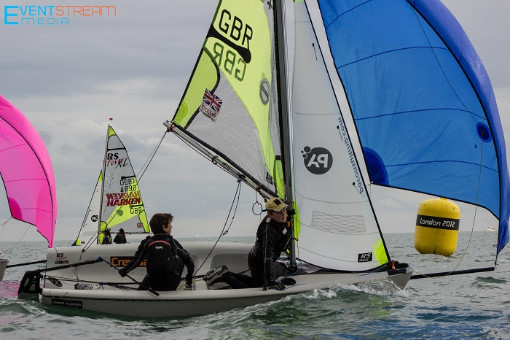 Following a comprehensive briefing on safety, then from RYA selectors, and finally the Principal Race Officer, the fleet were allowed to launch into a rather unpromising Northerly wind of only 6-8 knots, a flood tide, and grey sky, for the long sail out, around the Bar Beacon into Hayling Bay West.

In fact the fleet turned out to be over-eager with the tide pushing them well over on the first attempted, and inevitably recalled start. The imposition of the U flag sadly didn’t temper the enthusiasm of all, or maybe just an error of judgement led to 13 boats being identified OCS but the rest of the fleet allowed to get away beating into the slightly murky Northerly. Jack Lewis and Lucas Marshall from Draycote Water SC found their way to the front in an early indication of what was to come, closely pursued by Henry and Rupert Jameson from the host club. Some place changes took place behind, but in another indication of form 3rd was taken by another HISC boat of Louis Wright and Jamie Allen. The Pye brothers from Draycote 4th and Jack Miller and Lauren Bentley from Felpham SC 5th.

With full fleet allowed to play again in Race 2, and as predicted by new RYA UK Junior Squad coach, Tim Rush, the forecast cold front arrived during the start sequence taking the wind from 6/8 knots up to 16 or even 18, a real surprise for some. The fleet cautious of the Black flag, got away first time, led round the top mark by Jess Jobson and Caitlin Webster of Royal Torbay YC,  Wright & Allen in 3rd gybed into a gust that took them through to first from which they extended to take the win. Lewis/Marshall worked their way through to 2nd followed by Jobson/Webster, then new pairing, Ossian Bracegirdle and Josh Bonsey of HISC, and Toby Mizzi and Tom Callan of Littleton SC. the Jameson brothers challenge suffered a setback with a broken Kicker.

A shower led to the wind easing for Race 3 where the fleet’s over-enthusiasm took over again, sadly leading to the disqualification of 7 boats, who didn’t even have the benefit of an early shower, with the PRO’s announced desire to squeeze in 4 races in view of a very unpromising wind forecast for Sunday. Another bullet from Lewis/Marshall hotly pursued on this occasion by Mizzi/Callan, the Jamesons back on form, then 4th with a foray to the front of the fleet, from Herne Bay SC, Michael & Samuel Dyer, and 5th Wright/Allen.

Testing the sailors fitness and concentration, a 4th race got underway with the tide now ebbing, which did not fox the Jamesons finding their way to the front, fast-followed by Freddie Peters staunchly crewed in absence of Louis Johnson on rugby duty, by cousin, Phoebe, who with a minimal all-up crew weight tore downwind, followed by Miller/Bentley in 3rd, the Pye brothers making another re-appearance in 4th, and Toby Atherton and Matt Bamber of Gurnard SC in 5th making up for their earlier U flag disqualification. Notably with some streaky wind conditions at play, Lewis/Marshall gave some hope to their pursuers, with a most uncharacteristic 8th.

The fleet wearily headed for home after a tough, testing day, both physically and mentally on the water.

Sunday dawned beautiful, but with a lack of wind as unpromising as forecast, leading to an hour’s postponement. To the surprise of many, it filled in early from the West and built to a nice, gentle 5/6 knots. The fleet were released into the very end of the ebb enabling them to 3 sail out but this time, to Bracklesham Bay. A smallish course was set, and with the tide setting the fleet back from the line, there was no need for recalls. Lewis/Marshall resumed normal service, with HISC’s Freddie Peters reunited with Louis Johnson, resuming his form of Race 4 with another 2nd. Charles Elliot and Ethan Miles also of HISC found conditions more to their liking with a 3rd and the Jamesons challenge really finally slipped away with a 4th, and the Pye’s 5th.

The final race, again in a light, but solid, building and backing breeze as the beautiful sunshine led surprisingly to some thermal activity over the Downs, with building foul, flood tide caught a number out at the pin end, unable to lay the start line. 4 boats emerged from the pin end carnage, Elliot/Miles immediately tacking off and leading to the finish in spite of having to perform two penalty turns on their way. Lewis/Marshall, signed off with another 2nd, proving masters of all conditions. New faces at the front on this occasion, but previous performers, all the way from Windermere School, were Pierce Harris and Alfie Cogger with a 3rd, the Jamesons with a 4th, and in 5th, from HISC and Papercourt SC, Christopher James and James Hall.

Very deserved winners, with only 7 points from a 6 race series, Jack Lewis and Lucas Marshall demonstrated their excellent teamwork in their victory speeches. Following the form book, the Jameson brothers took a very convincing second. However in a photo-finish, or rather, count-back, Peters and Peters/Johnson, were pipped for 3rd by Wright/Allen.

A big thank you to Volvo Car UK and Magic Marine UK. With the support from these 2 fantastic sponsors we awarded the use of a Volvo with full tank of fuel to 2 families for the weekend, this all goes a long way in helping to keep our lovely young sailors attend events. Also a big thank you to Magic Marine UK for their very generous contribution of vouchers for the prizes.

The fleet now go their separate ways, some to RYA Zone Championships, and then reconvenes in early October at Grafham Water for the final part of the selection process, with much to play for. Online entry for both Zone Championships and Grafham Grand Prix is now open, full details – http://rsfeva.org.uk/