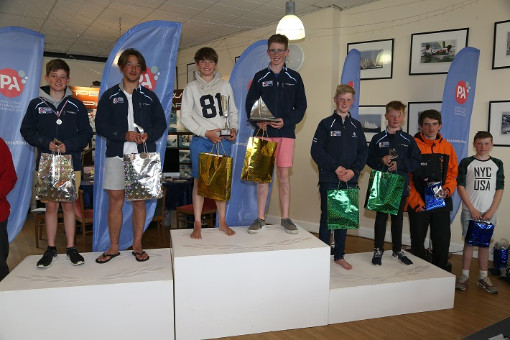 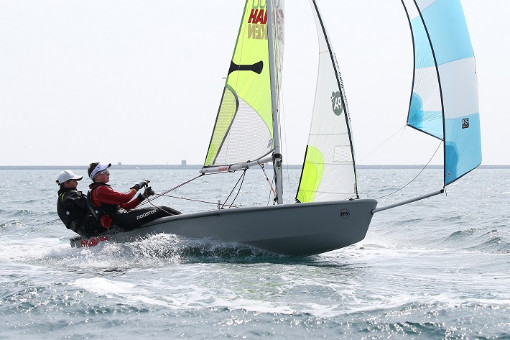 The RS Feva National Championships and Euro Cup took place over 4 days from 28th – 31st May 2016 at Weymouth and Portland National Sailing Academy. Competitors arrived to a flurry of activity to get all boats prepared for the 4 days ahead.

Sailors were greeted by a happy atmosphere in the boat park with music playing to help settle the nerves before the sailors hit the water for day one of qualifying. Head Coach Peter Perera held a briefing for competitors followed by Principal Race Officer James Gollop who explained the course and the expectations for the event.

The qualifying series involved all teams being equally split into 4 different flights; Red, Yellow, Blue and Green. Each race throughout the 2 days would involve a round-robin of the groups racing alongside each other. 5 races were completed in all 4 flights with extremely close racing throughout. Matt Taylor and Will Carron from Brightlingsea and Alton Water Sailing Clubs lead the way into the Championship Series with an impressive score line of 1, 1, 2, 1, 1, close behind father and son team Steve and Jamie Tylecote from Rutland SC and Freddie Peters and Louis Johnson from Hayling Island Sailing Club in 3rd. Each team would carry their overall score from qualifying in their Championships scoreline so the overall position is a big factor going forward.

Sunday night was a sociable affair with sailors and their families enjoying a sailors supper in the clubhouse, photo booth and karaoke. Those who tuned into the RS Feva UK Facebook page would be able to enjoy the Feva gang singing and dancing to many favourite tunes and what a happy gang they all were!

Going into Mondays Championship series the fleet was split into Gold and Silver fleets.

Monday dawned and you could not have asked for a better day. The sun was shining and competitors experienced Weymouth at its best with champagne sailing all day! With a changing forecast for the final day of the championships on Tuesday, it was decided that 4 races should be sailed.

The silver fleet saw tight at the top with leaders Ethan Gerrell and Francesca Gilks from Queen Mary SC on 72 points, Patrick and Annabel Whelan HISC in 2nd on 73 points and Rohan Murphy and Lucy Ferguson South Windermere SC on 81 points in 3rd place over all.

Tuesdays forecast was as promised, windy! Having raced the 4th race of the series on Monday only 2 races were needed to complete the series. The fleet launched on time and headed out to the race course. With wind strengths of 22 – 29 knots it made for a challenging but truly exhilarating time for our truly amazing RS Feva Sailors.

In race 1 Freddie and Louis followed their form of the championships and finished in 1st securing the RS Feva National Championships title and wow they really deserved it with a truly impressive score line discarding a 7th and counting four first place, one 2nd and their qualification result of 3rd! Following in second place on the water was Louis Wright and Jamie Allen HISC and then Daniel Lewis and Katheryn Byne Draycote Water SC.

The final race was just as epic as the previous! Henry and Rupert Jameson took a convincing 1st place, Freddie and Louis came over the line in second followed by Louis Wright and Jamie Allen in third.

The silver fleet saw Rutland boys Harry Martin and Matthew Peckham take the final first of the championships followed by Maddy Kirk and Toby Petit in 2nd and Ellie Hill and Chase Drew from BCYC in third.

With the Championship series completed in both fleets sailors headed back to the boat park to pack away. Sailors were treated to sharing the boat park with some real legends which was a fantastic end to the championship with sailors able to see their sailing idols getting ready for their Olympic journey to Rio.

For the prize giving we were very lucky to have Dylan Fletcher and Alain Sign award the prizes. RS Feva Chairman Jon Webster thanked Dylan and Alain for their time and gave them a good luck gift each from the UK RS Feva Class. Thanks also went to the very large team of helpers on and off the water and of course to the competitors for making it such a great event.

Exhilarating times for all on the water and what amazing sailors they all are, well done to all competitors

Finally a very big thank you to our very generous sponsors PA Consulting who have been supporting the UK and International Classes over the last 2 years, also Magic Marine who gave prizes and vouchers for the winners

A busy couple of months ahead with the RS Feva Inland Championships followed by Itchenor Schools week, Grand Prix at Brightlingsea in July and so much more and then the big on ; the PA Consulting RS Feva WORLD Championships in Santander. 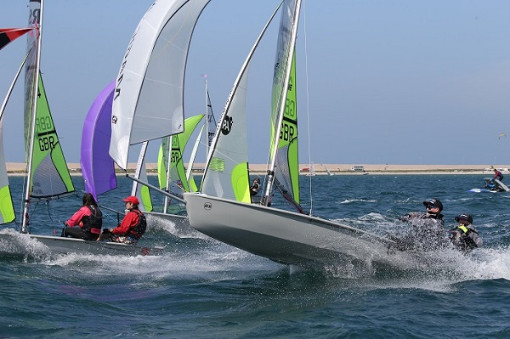 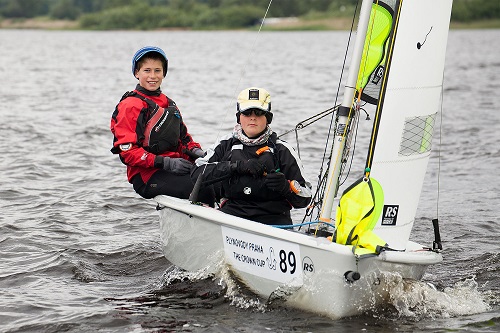 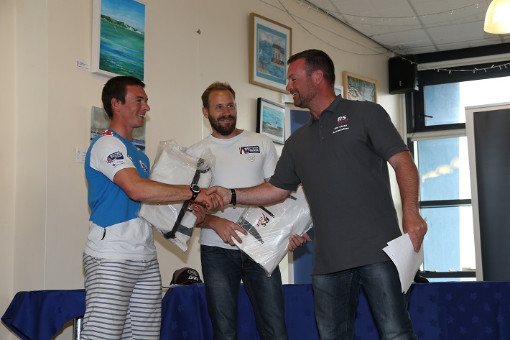