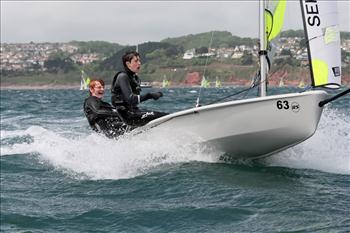 The final day of the 2012 SEKONDA RS FEVA National Championships was a day to remember. Driving rain, poor visibility, 14 – 18 knots of breeze with the threat of more wind later. The forecast had been varied all weekend but the Race Officer decided to err on the side of caution and held the silver fleet on shore whilst gold fleet went out to test the conditions. Although the wind didn’t build as forecast, the rain swept in & at times the windward mark could not be seen.

Robert Masterman crewed by Marcus Payne continued to show the fleet their heavy wind skills & they streaked away to win the first race of the day comfortably. Elliott Wells & Jake Todd flew downwind to jump from 20th to 4th & then climbed through to 2nd place at the finish. Third to finish was overnight leader Matt Whitfield & James Taylor.

The visibility worsened at times for the second race of the day but again it was Robert & Marcus leading the way from start to finish but this time Matt & James were hot on their heels securing 2nd place & ensuring that the final race was a ‘show down’ between the two. The final start saw Matt & James use match race tactics to keep Robert & Marcus back & the pair were last across the line resulting in Robert & Marcus counting a 10th from the previous days light wind race. Meanwhile the rest of the fleet were fighting it out for 3rd place overall.

At the first leeward gate Tom Darling & Will Dolin were ahead of James Hutton-Penmam & Thomas Jayasekara then James Curtis & Harry Phelps. They extended their lead & the positions held to the finish.

The championship however was decided further down the fleet with Matt & James securing the title with a 39th whilst Robert & Marcus posted a 37th which gave them 2nd.

As the gold fleet sailed home the silver fleet came out to race. In the end it was Libi Askew & Emily Proud 1st at the post followed by Max & Cody Griggs with Rex Farrant & Lewis Keen in 3rd.

Matt & James are worthy champions of the open title, youth title (under 18) & All Boys Trophy, Robert & Marcus came 2nd despite scoring 5 firsts in the windier conditions. 3rd place went to 11 year old Elliott Wells & Jake Todd whilst in 4th were Anna Prescott & Jess Eales who also secured the All Girls Trophy. Tom Darling & Will Dolin finished 5th & took away the Junior Trophy (under 14) just ahead of Morgan Peach & Sophie Caseldine making a guest appearance at the event & first local boat.

A special mention was made & prizes given to the three 10 year olds competing at the event: Jessica Jobson; Bethany Hewitt; India Edwards.