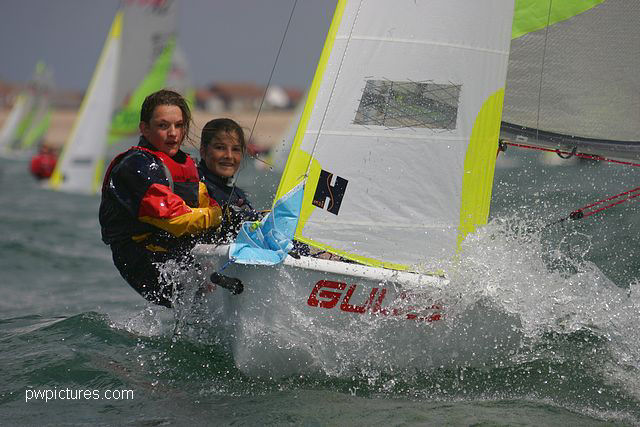 This was going to be some Nationals. Competitively, could the Saxton boys claim a third title against ever stiffer opposition? Numbers, could the fleet hit 60? Weather, an average wind of 12 knots forecast, would it play ball?

Well, in practice the twins were trumped by an all girl team who were utterly dominant. Frances Peters and Claire Lasko have a very bright future in competitive sailing. Numbers in fact nearly hit 70 and the average wind was about 12 knots, just not all the time. First day regular 28 knot gusts, second day lucky to get 3 races in with the wind nearly breaking the 3 knot barrier in the 3rd race (the lightest). The third day had perfect 12 knots with stronger gusts and weaker lulls with loads of sunshine.

Before getting to racing just consider the entry list: double national champions (in 2 classes, but also no less than 8 boats containing national squad members from other junior and youth classes and 12 with members from intermediate and zone squads.

Just in case you were beginning to think that the RS Feva is “only” a junior boat, just get a load of this: 21 boats were sailed by parent/child combinations! This just goes to show the true versatility of the class. Some of these ‘older’ competitors were looking at Saturday being payback time for the past indignities heaped upon them by the young guns. Experience and, lets face it weight, were going to come into their own. Upon even closer examination of the entry list the Team GBR coach from the Sydney Olympics was to be found competing with his son as was a past Fireball world champion with her daughter. Not to be outdone a treble Olympian made up the front end of one boat when sailing eventually got underway. Saturday As for the sailing, well when conditions had moderated until it was only gusting 22-24 knots the fleet took to the water just gone 3pm. It was lively enough for the very experienced let alone any others. On the way to the start the aforementioned world champion was reaching at sub-orbital speed with kite up when the most glorious wipe out occurred after both helm and crew had inadvertently parted company with their mode of transport. Given that this was happening to some really rather useful sailors it wasn’t too surprising to see most of the fleet taking the occasional salt water bath. Following one aborted start, a general recall, it was decided that the breeze had in fact not really sufficiently abated and the PRO together with the safety co-ordinator called it a day.

Sunday Conditions had moderated, too much. No wind to begin with caused a long tow out to Hayling Bay. The forecast was for maybe F2 Northwesterly and we got a F1-2 Southerly. The PRO went straight into using the I-flag to hold the eager fleet at bay. Bad news for the defending champions, the Saxtons, who were seen 45 seconds before the start madly reaching off with kite up to get to the pin end in obeying the round the ends rule. They were much better off with the restart of the race following the general recall.

So the championships were finally underway. The Saxtons went up the middle but were conclusively trumped by those that went further left and found slightly better pressure. It seemed that local knowledge was an important factor with the Peters family and Henry Maxfield, all from HISC running away with race one. Younger brother James crewed by Guy Stevens got the better of older sister Frances crewed by fellow ex Oppie star Claire Lasko. David Thomas with James Diamond from Warsash pushed the above three hard in order to keep the first adult/child combo, Debbie Darling and Brittany Mackinlay, at bay. They were to develop a terrific battle over the day with fellow family combo Stewart and Alex Hawthorn who were sixth for this one. Elsewhere Alex Poyner and Holly Tucker started the championship well in the junior division (combined crew age of -25 years with a12th place just behind Martin and Alexandra Orton.

For the second race the wind was beginning to show signs of instability. Again the middle seemed to be the way to go. Anyone who had the misfortune to be buried at the start suffered badly. No get out of jail free card available this time but there was only an individual recall. Insufficient boats returned for the x-flag to be lowered. Who was it? Sailing was close up till the first mark. After that we were treated to a master-class by Frances and Claire. It was the first horizon job that could be remembered in any Feva championship race to date. Behind them the racing remained close with the Hawthorns taking second from the fast moving Saxtons who in turn were clear of Darling/Mackinlay. Rising 420 star Maria Stanley crewed by Oppie hotshot and sister, Imogen took 5th. Elsewhere Feva designer Paul Handley sailing with son Alistair proved he still had it, coming 7th for the second race on the trot. Jess Derbyshire together with Bethany Robson were clearly enjoying the day romping in ahead of father John with brother Harry. And the poor sole who was OCS? James Peters.

The third race proved to be a bit of a mare. The wind was shifting west, the course was relaid. The start was delayed and then there was a big shift back south in a soft breeze. Oliver White and Aaron Smith rocked away at the start and disappeared with a long trail of boats wallowing in their wake. The one boat that thought it wasn’t on to allow a second horizon job in one day? Frances and Claire. Must have been jealous I suppose. Anyway, it took the girls right up until the finish line to catch up with the boys. The last 300 yds turned into an desperate duel with the supercharged girls gaining with every twist, turn, luff and bear away. The boys were frantically defending the inside line into the finish line during the reach from the leeward mark to the finish line 100 yds away. Finally, with the two dead level, they reached the finish line. Oliver had the inside line he had defended so vigorously. The consequence was that as they luffed round the mark Oliver had it by a couple of feet from Frances. Elsewhere the Stanley sisters were hitting quite a rich vein of form with another 5th place to add to the one in the second race. Sam Stacpoole and David Grant were also hitting a groove with a 6th to add to a 22nd and 11th. For the majority though positions were quite stable as the race became a virtual procession. With huge holes beginning to appear fully one half of the entrants didn’t make the time limit and scored DNC.

Well, that sorted out the discard for most of the fleet. The fourth race was called off in the face of an oscillating breeze.

Monday Race 4 was started promptly in Hayling bay again. It started badly though for Maria Stanley who managed to get a couple of boatlengths in front of the line. The Saxtons showed their pedigree by picking the shifts and leading everyone home. Frances and Claire battled back from an average first beat to clinch second while Stuart Godwin with Sophie Mckeeman began a very impressive day with the first of two third places. Jess Derbyshire was by now beginning to give her father palpitations with the very real possibility of upsetting the established order. She and Bethany Robson were extremely unlucky to only come fourth.

Conditions were proving to be very tricky with the wind mixing it up.

Race 5 saw another unfortunate over the line. This time the Saxtons and Jess Derbyshire went back despite it not being them. A terrific recovery saw Ben and Tim virtually fully recovered by the windward mark. It presumably didn’t hurt their chances that there was a huge shift to the right within 5 minutes of the gun going. The shift didn’t seem to get to the middle or the left. Frances Peters meanwhile got right on with it and simply started to stretch away. The girls were like synchronised swimmers in the boat. They moved in unison to meet every wave and they used kinetics to the full. Guy Ellis might not have had such perfect movement (adult you see!!) but he and Alex Mothersele used the shifts to the max to get a well deserved second place. Greg Carey and Kate Sparks also went beautifully to get a hard earned third place. Elsewhere Philip Garner with Matthew Deacon-Smith were in the middle of a fantastically consistent day with their second of three ninth places.

The final race was a repeat of the last as far as the new champions were concerned. Pressure or not Frances and Claire won again allowing them to discard their worst result – a second place. Behind them it was a case of the Saxton boys not having a mare and allowing the consistent top five performers of James Peters with Guy Stevens to snatch second overall from them. A terrific fight ensued with great close quarters manoeuvring between the two including one slam dunk by the twins. They held the upper hand to the end and appeared to have sown up second overall with James Peters laying claim to third. That position was only temporary as the fight went to the protest room with a claim that the slam dunk wasn’t quite fully legit. The jury agreed with the consequence that the overall positions were reversed giving the proud Peters parents a championship one-two between their gifted offspring. Oliver White/ Aaron Smith scored 4th overall while Maria and Imogen Stanley claimed 5th. Debbie Darling and Brittany Mackinlay claimed 6th and were the 3rd all girl team in the top 6!

Competition was good throughout the fleet with individual battles all over. One boat reminded us that despite competition and cold the main aim in a Feva is for all to have fun. That was Freya Yoward and Jazzy Tucker who sang all the way downwind in race 3 giving spectators 200 yards away a completely clear rendition of a number of songs as well as a complete countdown to every gybe!

Now to the Europeans in Hoorn, Holland and the first class Worlds next year.