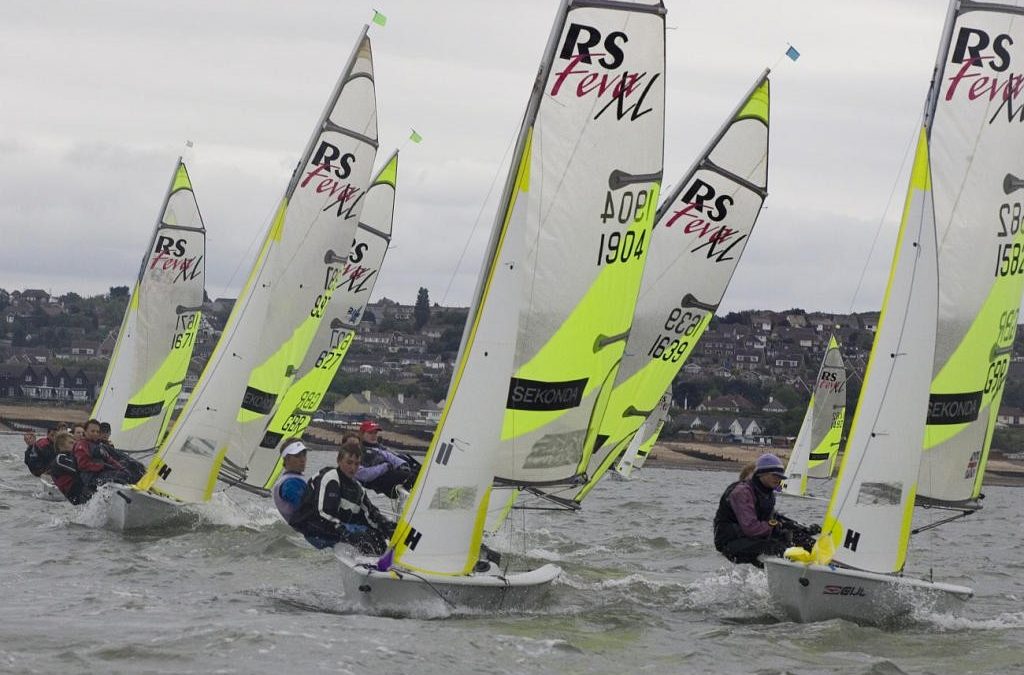 Enthusiasm’, ‘commitment’, ‘fun’ and ‘skill’ were all words used by David Merriman of the sponsors Sekonda to describe what he witnessed at Whitstable over the Bank Holiday weekend.

Funny then given that competitors were faced with wind, rain, calm, cold and storm. Whitstable Yacht Club’s generous and warm welcome made up for a lot but it was still the competitors who stole the show. In the end it was Olympian and Flying 15 world champion Barry Parkin who won with 8 year old Jack

Prior to setting sail on Saturday the clever money was on a James Hamer/Ben Gratton v. Nathan/Anna Ackroyd for the main spoils whilst amongst the adult/child combinations it was on a Rob/Georgi Cage v. Barry/Jack Parkin.

The junior (combined age max 25) looked like being more open but with Tim Gratton/Chris Taylor leading the charge with the likes of Alex Mothersele/Hamish Ellis and Jess Lavery/Philippa Lawson in hot pursuit. Also hot favourites in the ladies category were Alex Poyner/Holly Tucker but a storming return to form meant that you couldn’t rule out Laura Sanders/Issy Duce nor Natalya/Francesca Eyre who had won their first Open meeting a month earlier.

Mike Fitzgerald had the unenviable task of ensuring fair racing was possible given the exceedingly challenging conditions over the three days but credit where it’s due – he did it. Saturday saw an average wind of approximately 12 knots from the ENE which gradually shifted further E but within which it was oscillating and peaked at 20 knots.

First blood went to the Ackroyds who pulled through to establish a controlling position over the Cages. The Parkins were never completely shaken off though and just managed to keep Hamer/Gratton behind. Laura Sanders/Issy Duce was sparkling in fifth Whilst Alex Poyner/Holly Tucker lay claim to the position they were to take proprietorial interest in over the weekend – 6th.

Second race saw James Hamer/Ben Gratton stake an early claim to overall honours with the first of 3 consecutive wins. They didn’t put a foot wrong as they stalked anyone who had the temerity to try and set up shop in front of them. It was dominant sailing without doing a horizon job. In fact these championships were noticeable for how close every single race was.

The other leading positions went in varying degrees with the pre-event form book. Making good forays into the more rarified atmosphere at the front were Paul/Mark Minors with a 4th, Craig/Ethan Davies 7th. The Eyres with two 7ths and Jamie Bolingbroke/Matt Heathcote with a 9th and 7th. Alex Mothesele/Hamish Ellis started well but tailed off in the energy sapping conditions. Finally honourable mention on the first day should also go to Derek/Eleanor Ness from Gurnard for a 6th & 8th.

It has to be said that 4 races back to back in those conditions was energy sapping. Consequently the first evening party with BBQ and disco was appreciated even if slow. The Hawaiian night on the second evening was perhaps slightly more raucous but by then everyone was nervous for the predicted howler on Monday!

So, Sunday then. Despite the big breezes reported elsewhere Whitstable sat quietly and sedately. The PRO sensibly brought the fleet ashore after a first attempt at racing. A number of competitors were saddened by this but a fair race wasn’t really possible as some boats couldn’t stem the tide to even reach the first mark whilst others got round that one but then couldn’t make the spreader mark!

With the forecast for Monday looking very grim the emphasis was on getting as much racing in as possible. By early afternoon it looked like a steady breeze of at least the minimum required had settled in and everyone got afloat again. There were plenty of shifts around and a balance had to be found between going with the shift or heading for the pressure. Ultimately it seemed as if pressure was probably king..

This was where wise old heads could reign if they could beat the lightweights! In the end it was Olympian and Flying 15 world champion Barry Parkin who reeled of three straight wins with 8 year old Jack. Now Jack clearly has some future ahead of him.

A lot of the youths struggled in one or more of these races which left the door open for the talented lightweight juniors. Tim Gratton/Chris Taylor weren’t to be denied as they took two 2nds and a 4th whilst James Hamer/Ben Gratton struggled to 7, 8, 19. This left Gratton with a one point lead over Hamer overnight. Poyner/Tucker continued the consistent series they were putting together to remain in 6th whilst the Ackroyds did manage a 3rd before bombing. Rob Cage had a so called bad day at the office but how bad can being in 4th be?

It was however a number of other youngsters who shone at various points. Mothesele/Ellis got a 5,4 whilst Jess Lavery/ Pilippa Lawson got 8,3,6 after a very ordinary first day. Who can forget the smiles of the two Hugos , Jones-Warner/Tucker after their blitz into a 5th place or the steady 4th of Harry Derbyshire/James Poyner. Pete McCoy/Natlaie Irons showed glimpses of true speed as did the slightly less fortunate (BFD) Phil McCoy/Josh Irons.

Also noteworthy is the emergence of the two school powerhouses in Feva sailing – namely Sevenoaks in Kent who came with three boats and Oakham in Rutland who brought five! Honours though went to Charlie Esse and Sophie Williams from Wellington College who made it 21st overall despite never having sailed together before.

The fantastic Alice Kent and Jamie Rankin from Rutland not only got 2nd in the silver fleet but also managed to get their in-loco-parentis Nick Neve awarded the famous JD trophy. This goes every year to the parent most soundly beaten by one of his offspring and the judges deemed that this should include anyone with care.

Monday unfortunately fell victim to the 30 knot winds so overnight positions got locked in. Some offered silent thanks whilst others bemoaned the lost opportunity to get at those just ahead of them. It was the right decision though and it was made early enough to have an early lunch and prizegiving.

There is always far too much to say in reports like this that just can’t be included but I’ll just list the various award winners seperately. I should also thank our most generous main sponsor Sekonda who gave every competitor a very nice watch and boom-bag and our secondary sponsor Craftinsure.com who provided all the various prizes.