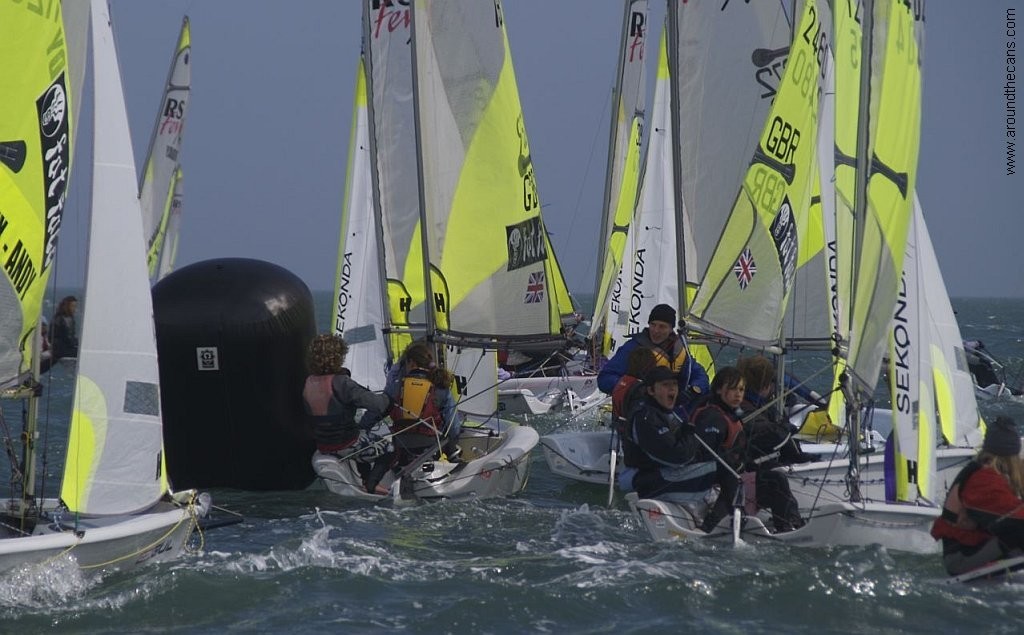 What a great event! A great slot on Meridian TV news about the event can be seen at www.itvlocal.com/meridian/?player=MER_HomePage_15

160 sailors (approx 45% female / 55% male) and a race official team from HISC that managed to pull the irons out of the fire to complete a decent series. The weather was diagnosed as suffering from schizophrenia. The forecast changed every twelve hours running up to the event whereupon it changed every 6 hours! Saturday was sunny but was lost to over-enthusiastic windspeed so the usual displacement activity took place with hanging out/ being cool/ rock hopping/ AGM/ coffee – yes honestly, Olympic games with medals presented by real live Olympians, etc. So, all even after day 1 then.

Day 2 dawned with cloud and zephyrs which turned into a F2-3 from the South. Great officiating got 2 races in flights under the belt before the breeze took its own coffee break. At this point it was incredibly tight with Tim Gratton/Chris Taylor, Derek/Eleanor Ness, and Jess Lavery/Philippa Lawson all joint top of the leaderboard. After an hour or so of doing floating cork impressions the wind came oout to play again with sufficient vitality to allow one more round of flights to be sailed and complete the qualifying series.

Gratton/Taylor were stamping their authority on proceedings by winning with unfeasibly comfortable margins. Then again they have the form rocket ship of the year so far. Last years champions Barry and Jack Parkin decided to do it the other way round this year with the irrepressible but diminutive Jack helming and the Olympian dad crewing. In the light stuff this worked a treat and they were in the Gold fleet level on points with Gratton. It was all so close that there only 7 points separating 1st from 12th! One of the pre-regatta favourites Bolingbroke/Heathcote was languishing in an unfamiliar 11th (desperate to either stop growing / get a move on into a bigger boat – delete whichever you think doesn’t apply!).

So with just the Gold/Silver fleet final series to go the main prizes were set for youths- Gratton/Taylor; Family – Parkin & Dad, Junior – Jones-Warner/Poyner and Ladies – Lavery/Lawson. So the final day…

Final Day: 30knots, the possibility of racing on a course set in the car park with plenty of depth available, rain that makes the SouthEast Monsoon look like drizzle, and a clutch deciding to leave early to beat the traffic. Couldn’t blame them but then the other Hayling personality appeared. By 1pm it looked like champagne sailing in sun and F5. Bev Moss and race team heroically set a course over the Winner Bank some 4.625 minutes at Feva warp speed from the launching point and sailed the Gold and Silver Fleets separately for safety reasons. The result was awesome sailing and viewing. The Gold Fleet managed 3 races and the Silver fleet 2.

Winter training paid off big time with the National Squad to the fore and making this breezy stuff look simple. National Squad coach Jonathan Lewis, who assisted everybody with advice and seminars (he earned his keep!) was justifiable pleased as punch. Consistency (and brilliance) paid off as Tim Gratton & Chris Taylor romped home to win overall with a 5,1,2. Alex Mothersele and Hamish Ellis kept them honest with a 4.6.1 to come 2nd overall. Biggest climbers of the day were James Bolingbroke and matt Heathcote who came from 11th the previous day to get 3rd with room to spare.

The incredible Jack Parkin coaxed his weary dad around to clinch the Family Champions title in 4th while Peter Curtis and son James were snapping at their heels 1 point further back. Third family were Olympian Debbie Darling with daughter Charlie in 9th overall.

The Sekonda National Junior Champion title went to Hugo Jones-Warner and James Poyner team who build a huge lead in their category and came 6th overall. Their potential is awesome and they are a new combination too. Sammy Bonella and Alexis Streeter got the coveted 2nd Junior prize whilst coming 18th overall. Will Lowes and Hugo Tucker are another new combo and will improve steadily got the 3rd place prize coming 22nd overall.

The Ladies national title was hoovered up by Eilidh McIntyre and Cassia Roberts who in 7th overall are some of the most improved sailors this year. Hannah Maunder and Becky Partington showed their true potential by getting second whilst also being 10th overall and third Ladies team was Jess Lavery and Philippa Lawson just behind in 11th overall.

Oakham School are showing fantastic form with 2 all girl teams coming in 15th & 16th in the gold fleet (Cathy Lear/Francine Counsell & Alice Kent/Lucy Childs) but also having the winners of the Silver Fleet Jamie Rankin and Oli Holland). In a hard fought final 2 races the silver slot in the silver fleet went to Abigail and Rosie Hickman who just overcame the points differential with 3rd placed Sophie Andrews and Victoria Payne. The big movers on the final day in the silver fleet were Joseph Wellerd and Martyn Wogan who won both races and climbed to 4th.

There were too many other notable performances to mention them all but perhaps these two stand out. Tim and James Norris had an outstanding last day with 16,2,8 to climb into 8th overall and Alex and Steffi Orton showed great potential by being the top transition squad performers coming in 14th overall.