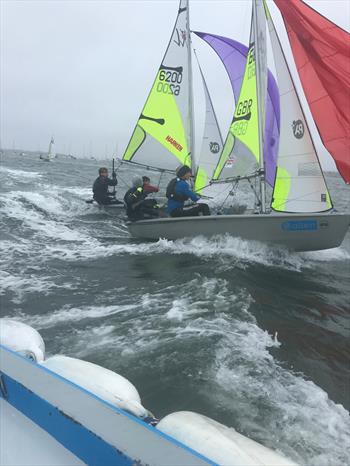 Parkstone Yacht Club and Poole Harbour was the venue of the second in the 2017/18 RS Feva Grand Prix series and the final event for the Winter Squad selection.

Having left quiet and shifty Northampton two weeks ago, the forty sailors arrived to a blustery and cloudy Poole Harbour for a weekend that promised much more wind and a few more waves.  The PRO decided that four races a day was achievable and so an eight race series with two discards was the aim and with some excellent race management and pretty well behaved (albeit tired) sailors, that was achieved.

The conditions were certainly challenging, as evidenced by Ben Hutton-Penman and Abi Jayasekara (Corinthian Otters) who rounded the windward mark first in race 1 only to put their kite up and be blown flat!  Others were a little more careful as they went round and the race was finally won by Alice Davis and Alastair Brown (Great Moor SC) continuing their Northampton form, 2nd were Tom Storey and Rupert Jameson (Yorkshire Dales/HISC) and 3rd William and Becky Craiger (Sevenoaks School).  Race 2 quickly followed and this time it was Freddy Woods and Lucy Hewitson (HISC) who finished first, William and Becky were 2nd and Ben and Abi, recovering from their first race dunking, in 3rd.

By race 3 all the teams were getting in their stride and the wind strength had moderated but was still a good breeze which created a few waves in Poole.  Ben and Abi won this one, followed by an extremely consistent William and Becky with Tom and Rupert 3rd.  Race 4 and the final race of the day saw some tired crews battling it out.  Robbie McDonald and Teddy Ferguson (HISC/Windermere School) sailed very well to win with William and Becky finishing 2nd (though subsequently had to take a penalty) and Ben and Abi 3rd.  So at the end of day one it was tight at the top with Ben and Abi just leading but on equal points with Willian and Becky.

Day 2 had lots of wind and lots of rain in the forecast!!  In the end the former was relatively moderate but the latter did prove pretty wet!!!  Robbie and Teddy were straight out of the blocks and starting where they left off the previous day with a 1st, they were followed home by Freddy and Lucy with a great 3rd place going to Tom Burke and Theo Stewart (Coniston SC/Windermere School).  Top places in races 6 and 7 were shared between three boats, Ben and Abi were sailing consistently and finished both in 1st place, Robbie and Teddy finished 2nd and 3rd and Tom and Rupert 3rd and 2nd.  And so to the final race which saw tired crews and a bit of a change at the front with Annie Hammett and Emma Wells (HISC) winning, 2nd place went to Freddy and Lucy and 3rd to Alexander Ratsey and Issy Spurway (RWYC/Bowmoor/HISC).

So the final count saw consistency pay for Ben and Abi with a net score of 13 after six counting races, 2nd were Freddy and Lucy on 17 and 3rd Robbie and Teddy on 18.  The first girl team was Annie and Emma and the Endeavour prize for great sailing in tough conditions to Rosie Hobbs and Tasha Danbacher (Sevenoaks School).A huge thank you to Angie, Brian, Matt and all at Parkstone Yacht Club for a great weekend.  But also a huge thank you to a great group of sailors who sailed extremely well in very tough conditions, finished eight races in a weekend and were complemented by the PRO team as being one of the most polite and well-behaved classes they have dealt with which is testament to the children and the class in general.

So the totals are being counted now and Squad places will be issued shortly, next stop for the Fevas are the Winter Championships at Weymouth and Portland Academy on 25/26th November and we look forward to seeing everyone there.  In the meantime, there are open training opportunities to hone your skills so take a look at the Class website.