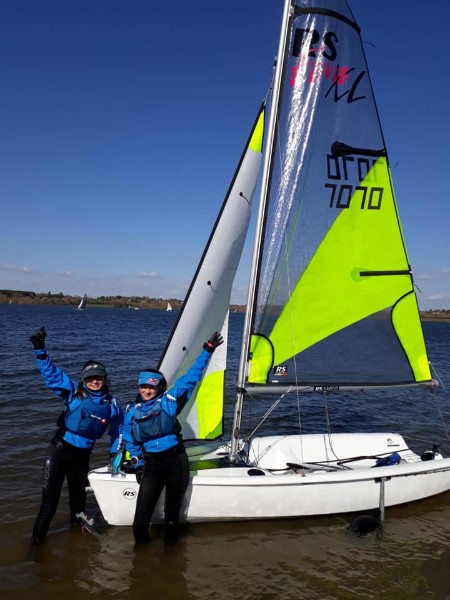 53 boats turned up at Draycote Water Sailing Club to battle it out for the title of RS Feva Spring Champion. In the briefing, on Saturday our race officer Richard Pye warned us all that if we pushed the line he would be forced to put up a black flag. Unfortunately, the fleet did not heed his words of advice so up the black flag went for the first race. This was proof of how competitive and tough the racing would be.

The first race went off to a good start with light winds and some difficult shifts. One pairing who seemed to have the hang of the shifts was Tom Ahlheid and Tom Stratton-Brown who went on to win the race.

During the next race, Tom and Tom continued to prove they were a force to be reckoned with but sadly with the dropping wind and increasingly bigger shifts the race had to be abandoned and racing was cancelled for the day.

Due to only getting one race in on day one the plan was to get four in for day two. So it was now the second race of the weekend with still very light winds, which luckily for me and Katherine was good news and we managed to win it after a close battle with Tom and Tom where we just got them at the last mark.

The next race was very similar with some close racing with us winning it, followed again closely by Tom and Tom.

The wind began to gradually pick up for the next races much to the delight of most of the sailors. So now for race four we saw Raulf Berry and Olly Peters winning the race, chased by Gabriella Clifton and Daisy Weston, who had been knocking in some brilliant results all weekend.

Race five was nowhere with some good wind. The points were incredibly close at the top and it’s never over until it’s over. Gabriella and Daisy had a storming start and led to the first mark and then we followed them round with another three boats hot on our transom. It was certainly going to be a close battle. On one of the downwinds, we managed to get ahead. All we had to do now was stay ahead (easier said than done). Luckily we managed to win the race. But we were still unsure of who had won overall as the points were so close and the racing was so tight.

Yet again it was another amazing Feva event with a fun and relaxed atmosphere but still, the racing was highly competitive and exciting. Thank you to Richard Pye, our race officer, for some great racing in challenging conditions and club manager Dave Rowe. And I would also like to thank the Dad who helped us tape in our burgee before we launched on day one, which proved very useful in the lighter winds!