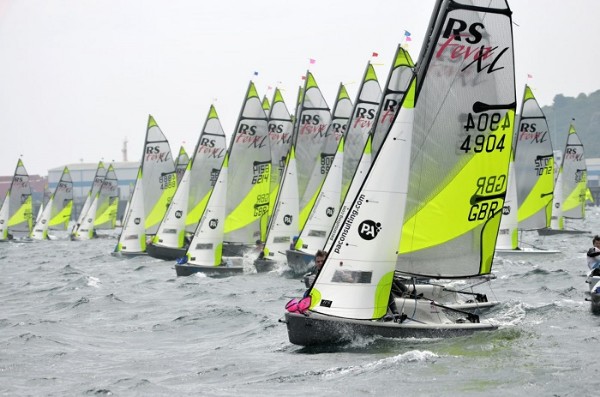 106 teams contested the RS Feva National Championships at the Weymouth and Portland Sailing Academy over the May bank holiday weekend.  It was great to see so many new faces enjoying the “RS Feva Experience” and, for the most part, Portland was at its sunny best.  Special thank you to our “overseas visitors”, with a good strong contingent travelling from Holland and almost the whole Guernsey Feva fleet making the trip across the English Channel.

The RS Feva Nationals takes the format of a “flighted” qualification series of up to six races which then decides a Gold and Silver split for an up to six race main series.

Day two can only be described as a master class in race officering from PRO Ian Bullock.  The sea around Weymouth and Portland looked glassy calm except for a small patch of wind where the race course was set.  Three races were achieved in light but consistent winds that left the six race qualifying series completed.  Sailors of the day were Sophie Johnson and Dylan Collingbourne who stormed their three races scoring 2,2,1.  Other notable winners in the tricky conditions were Dutch Duo Robbert Huisman and Gijs Zuidema, brother and sister combo William and Becky Caiger, a fantastic victory for Lucy Hughes and Josh Manning, along with day one winners William and Sebastian, Luuk and Sjoerd and Ben and Abi.

So qualifying series complete and the real leveller in the Feva fleet, the split into Gold and Silver with the teams only counting their overall positions.  William and Sebastian were leading, closely followed by Luuk and Sjoerd and then Ben and Abi.

Day three always looked like the day when being PRO was not high on the “to do” list and as hard as Ian tried, only one race was sailed in very light and variable winds.  In Gold fleet, a number of black flags saw teams drop quickly down the leader board, most notably Ben and Abi who saw their 3rd place overnight drop to 26th after day three.  William and Sebastian demonstrated beautiful light wind sailing craft with a solid win, followed home in fantastic style by daughter and Mum (still talking) Alice and Emily and a great third place for Optimist duo Joey Taylor and Terry Hacker.  In Silver fleet Eilish Graham and Olivia Rawlinson won, followed home by Baptiste Larencin and Jonathan Moss and third were Marnie Aers and Abbie Wallace.

Day four dawned with the promise of more wind, those arriving early at the club who found the first three days of light and variable winds a struggle all had smiles on their faces.  Good constant breeze and white horses beginning to show, it was time to get the boats really going and PRO had summoned an earlier start and four races.  In Gold fleet, even though the conditions had livened the same names were at the front really proving that to be at the top you have to have the ability in all weathers.  This time sailors of the day were Robbie and Teddy who scored 1,4,3,2 and really showed the fleet how to sail in stronger winds.  Other victors on the final day included William and Sebastian, Robbert and Gijs who won race two by nearly two minutes and day one black flag carriers Ben and Abi.  The Silver fleet sailors did amazingly well in conditions that were often far closer to their limits; fantastically consistent sailing from Ted Lane and Rupert Clapham saw them score 5,3,4,2 and shoot them to the top of the leader board but other victors included Eilish and Olivia and Blythe Berry and Eloise  Clapson McBride who scored three firsts, Eloise losing her usual helm of Julia Barnes to a broken arm following a biking accident after day two!!

And so to the final counts, in Silver Fleet winners were Ted and Rupert, in second was Henry Hallam and Ashley Hill and third Sandy Bailey and Jack Francis.

In Gold fleet, it was so tight at the top but William and Sebastian were very worthy winners and crowned the 2018 RS Feva UK National Champions, four points clear of three boats who scores could only be parted on countback.  In second was Robbie and Teddy, third Ben and Abi and fourth Sophie and Dylan.  Fifth place went to the ever consistent duo of Tom Storey and Rupert Jameson who were always in the top ten and rarely out of the top five and in sixth Dutch duo Robbert and Gijs who suffered an unfortunate halyard failure in the final race of day four.

So that is it.  A big thank you to Pete and Sally and everyone at the Weymouth and Portland Sailing Academy for putting on such a great event for the class, including all the helpers and Safety fleet, and always making us feel so welcome.  A massive thank you to Ian Bullock for a master class in race management and delivering a fantastic and very fair set of races in sometimes challenging conditions.  And finally to the real stars, our sailors who once again sailed extremely well in tough conditions, however, continue to behave impeccably throughout and showed sportsmanship and friendship that defines the RS Feva class.

Next stop for the Feva roadshow is the lovely Chew Valley for the Inlands on the 16th/17th June followed by the Summers on the 7th/8th July at Grafham Water and then the big one, the Europeans in August as part of the RS Games back in Weymouth.