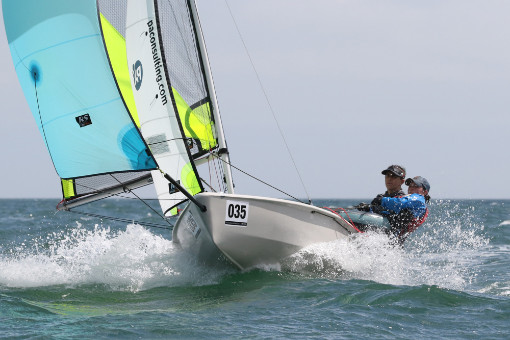 222 sailors from around the country descend on Sunny Torbay aka Torbados for what was set to be a superb 4 days of racing. The event set to have 2 days, 6 races of qualifying and then the all-important Championship series with a further 6 races scheduled. Each series would allow the teams to discard their worst score, but qualification rank would be carried to Championship series and cannot be discarded.

There are many titles to fight it out for at a Feva National Championship and this year a new category was introduced, the idea of current Class Chairman Jonathan Webster the category named the Pro-Am would see Ex-RS Feva sailors, or “Pros” return to the fleet accompanied by a young inexperienced sailor who has never competed in an RS Feva before. Current 29er and RS 200 sailors, as well as some keen Dads a couple of sibling teams and a Mum, made their guest appearances back in the fleet, giving their young crews a real-life experience of racing in this highly competitive event.

Race 2 and a mix up of flights, meaning sailors race against a new batch of competition and its Henry Chandler and Louis Johnson, who take a 2nd win of the day followed by Ben Hutton-Penman and Lucy Hewitson and Ewan Wilson from Wormit Boating Club and Teddy Ferguson of Windermere School in 3rd. The Pye brothers took race win in the other flight race with Matt Taylor and Will Carron Brightlingsea SC and Burnham Squiddies in second and Jamie Rastrick Yorkshire Dales SC and Madeline Bristow from Leigh and Lowton SC in 3rd.

Wind still up and sailors beginning to tire for race 3 and a second race win for the day for Ben Hutton-Penman and Lucy Hewitson, Dylan McPherson and Dylan Collingbourne from Burnham SC in 2nd place and Father and daughter team Richie Bailey and 7-year-old KT Bailey in 3rd. Henry Chandler and Louis Johnson finished their day with a clean sweep and banked another 1st. William Caiger Sevenoaks School and Caitlin Morley Burnham SC took 2nd and Pierce Harris and Alfie Cogger came in 3rd.

Day 2 can only be described as frustrating! Race team and sailors faced light shifting winds making laying a course a challenge, to say the least! Conditions gradually improved only to go light again for the final flights finish, quite a contrast to Saturday’s windy conditions so this makes qualifying a true test of the sailor’s abilities across all conditions. We did see some seriously impressive racing for the final day of qualifying with a standout performance in race 4 by Freddy Woods and Phoebe Peters Hayling Island Sailing Club winning the race by a whopping 3 minutes!

Bank Holiday Monday and the fleet now divided into Gold and Silver the pressure building for all. The day started with a postponement due to lack of wind and thick sea mist, sailors spent the time chilling out, chatting and playing cricket. Visibility improved enough to launch the fleet only to roll very quickly back, forcing the fleet to turn back to the safety of the boat park for a little while longer. When finally the mist lifted and the wind started to come in the fleet launched and made their way to the racecourse. With the building breeze throughout the afternoon, sailors were treated to some more fantastic racing. Race 1 of the Championship series and it’s Ben Hutton-Penman and Lucy Hewitson 1st, Pierce Harris and Alfie Cogger in 2nd followed by Pro-Am team Henry Jameson Hayling Island SC and 10-year-old Jake Harris from Windermere School (and Pierce Harris little brother!) in 3rd.

Matt Taylor and Will Carron win race 2 of the day with Ewan Wilson and Teddy Ferguson in 2nd and Katherine Byne and Phoebe Jones Draycote SC and Burnham Squiddies taking 3rd.

The Silver fleet saw a change at the top with Joe Slipper and Tea Sirolla of Queen Mary SC and local sailors Julia Barnes and Emily Jansen RTYC 2nd followed by Issy Leach and Libby Petit Rutland SC in 3rd.

Conditions by this time are really hotting up for the final race of the day. Pye brothers come over the line in 1st with Henry Chandler and Louis Johnson in 2nd and Pierce Harris and Alfie Cogger in 3rd.

Final day and it’s all to play for in both fleets. It was an early start for all, the conditions great and no waiting around, launching as slick as ever thanks to the superb team on beach and we saw the fleets head out to finish the championship and secure their titles. After nine races in very tough conditions, the final three races were played out in ever strengthening and shifty conditions which definitely challenged all the sailors across both fleets. With the maths done, teams knew exactly what they had to do.

First race of the day was silver fleet, race 4 of the series it was Julia Staite and Raulf Berry who kicked off with a 1st, Harry Jones and Robert Byne in 2nd and Max Beverly and Sam Rawlins in 3rd.

Gold fleet and it was tight at the top, Pierce Harris and Alfie Cogger start the day as the leaders with a 1 point lead to Ben Hutton-Penman and Lucy Hewitson. Ewan Wilson and Teddy Ferguson finish the race in 1st, Pierce and Alfie in 2nd and Ben and Lucy came in 3rd, this would equalize the top 2 putting Ben and Lucy at the top of the board on count back.

Golds, a tough race for the leaders of the championship with both top boats on the wrong side of a shift, both Ben and Lucy and Pierce and Alfie found themselves down in 11th and 10th place, this was to be both teams discard for the championship. It was Tom Storey and Ollie Kent taking race 5 win followed by Pro-Am team Henry Jameson and Jack Harris and Sophie Dennis and Delphine Ala in 3rd.

Golds Race 6 and it was all to play for. Henry Chandler and Louis Johnson finished their event with a 1st, Dylan and Dylan came over in 2nd and Tom and Ollie in 3rd. It was Ben and Lucy who followed in 4th with Pierce and Alfie in 8th, this would be enough of a gap between race leaders to give Ben and Lucy the RS Feva National Championship 2017 title.

To say the racing at the top was tight would be an understatement, indeed the standard across the fleet was incredibly high and extremely competitive. This is a class to be truly proud of and on behalf of the UK RS Feva Class Association Committee and the team at RS Sailing we would like to thank all the competitors, their families and supporters for making the class such a wonderful place, we would also like to thank the team at Royal Torbay YC for a tremendous few days, superb hospitality and faultless race management. We would also like to thank our fantastic Sponsors PA Consulting who have been a huge support to the class over the past 3 years, again this year the class has been able to give every competitor a PA Consulting and RS Feva branded top quality dry bag which proved a to be very popular with all our competitors, it has been super to be able to award all our competitors something so special.

Congratulations to our new National Champions