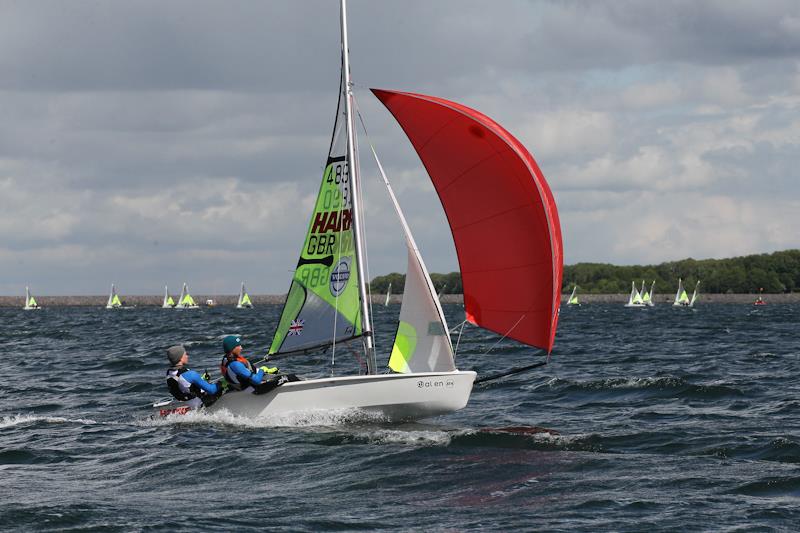 Rutland Sailing Club was home to the PA Consulting RS Feva National Championships 2015. 178 RS Feva sailors from around the country gathered in anticipation of some of the hottest junior double-handed racing in the country and the legendary atmosphere on the shore that is typical of RS class events.

Day 1 brought rain and a windy forecast. It was set to be a challenging day in conditions where the RS Feva really comes to life. Sailors looked out on the lake and there was an air of apprehension and nerves as the pinnacle event of many sailors’ sailing calendars was finally here. Despite the conditions, it was impossible to deny the evident excitement across the fleet.

With a fleet of 89 boats in attendance, the first 2 days of the regatta constituted the ‘Qualifying series’, when boats were split into 4 fleets and a schedule was organised to mean that everyone raced each other to create a ranking order. Once complete the fleet was split into ‘gold’ and ‘silver’ fleets for the ‘Final’ series on the last day of the regatta. This was where the real action began and the champions were crowned.

Carnage on the racecourse as the high winds really sorted the men from the boys. Boats were forced to retire as a result of gear failure or as the crew became overwhelmed by conditions. Brothers, Dan and Fin Armstrong made it look easy by taking a perfect score away from the day, posting a string of 1st places. The Jameson brothers also had a strong day in the breeze, leaving them in 2nd place overnight, while Matthew Leckie and Izzy Bristow snapped at their heels in 3rd.

Fuelled on adrenaline, sailors returned to shore raving about the day, most grinning ear to ear. Right on the cue, the weather started to improve and as if enough energy hadn’t already been burned in the course of 3 wild races on the water, competitors piled onto the inflatable human table football pitch that had been laid on for an evening of fun and games. Meanwhile, others feasted on the BBQ food arranged for the fleet and enjoyed the music playing as they looked over the lake.

Refreshed and wanting more, sailors arrived on Saturday to a totally different set of conditions. Sun and light winds were the order of the day, would this see a set of new faces at the front of the fleet? In the end it was the Jameson brothers who gave it their all to knock the Armstrong brothers off their perch. The boys sailed a consistent day in a set of inconsistent conditions and took away a 1,2,3 putting them into the lead going into the final series. The Armstrong brothers were not giving up without a fight and held on to 2nd position overnight, while Rory Odell and Joshua Bonsey were hot on the chase in 3rd. Freya Black and Hatty Cage lead the race for the ladies boats, sitting in 9th position overall.

The points on the scoreboard were tight and no one could rest on their laurels as Sunday brought an increasing breeze and 4 intense final series races. The Armstrong brothers took to the wind like a duck to water and resumed their string of firsts, letting no one past them over the course of the day. After winning with a race to spare, the Armstrong brothers were to be crowned 2015 RS Feva National Champions. Iain Bird and Jake Hardman settled for a string of 2nds, finishing with a 3rd place which put shot them up the scoreboard and putting them in 2nd place overall. Odell & Bonsey took bronze, while Daniel Lewis & Tristan Payne and Henry & Rupert Jameson finished in a very reputable 4th and 5th position respectively.  Black & Cage climbed a place on the final day to mean that they finished 8th overall and took the coveted ladies trophy home.

A super 3 days which brought a full range of conditions, plenty of fun for all of the sailors and cause for celebration for many across the fleet. The success of the event is down to the support of this year’s sponsors; PA Consulting Group (http://www.paconsulting.com) and Volvo (www.rssailing.com/affinity), both of whom we have been privileged to have on board. We also owe a thank you to Magic Marine (www.magicmarine.com) for their continued support in the class and for the provision of prizes for the championship.

The next instalment of UK RS Feva action will take place at Chew Valley on 20th and 21 June for the Inland Championships then to Burnham Sailing Club on 4th-5th July, where the Volvo RS Feva Grand Prix series will be resumed. After the roaring success of the first GP in Northampton, it’s set to be 2 weekends not to be missed.