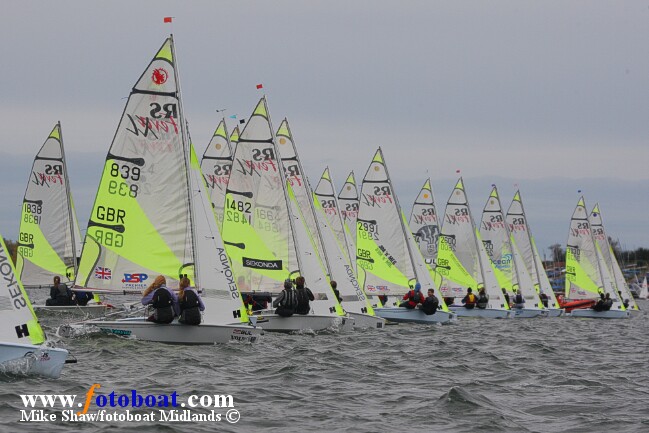 On Saturday the Race Officer, Andrew Weeden and his team managed to get the entire fleet afloat just in time for a steady 25 knots with gusts of 37 to settle in over Draycote Water. Inevitably there were the experienced thrill seekers launching themselves off waves and proving that Fevas can indeed fly even if only for short periods of time. Racing though was temporarily postponed until later in the afternoon.

Race 1 proved to be the only race of the day. Eilidh McIntyre/Vikki Payne carried on where they left off last weekend breaking kit! A gut busting 5 lap windward/leeward saw them break their pole on the second lap. They still held on for 2nd though behind the awesomely quick Hugo Jones-Warner/James Poyner combo. Again as per last weekend the 3rd boat reveling in the conditions was Tim Norris sailing for the last time with brother James in a Feva – roll on Mollie! As predicted Alice Kent/Lucy Childs were still sweeping the cobwebs out of the boat back in 14th (so that was their first discard then! 6 races 4 to count).

Day 2 was going to be even more exhausting as the race team were determined to get the full series in – 5 races to go then! The drizzle cleared leaving a great 12-15 knot average wind. Plenty to let the stomach muscles groan.

3 races were held back to back followed by a short break for refueling and then a last push for the season with another 2 to finish off. Only the last race was shortened at all to some 30 minutes so you can guess at the sleep enjoyed in cars on the way home.

A battle royal was to be played out with Alice Kent/Lucy Childs and Hugo Jones-Warner as the main protagonists. Alice/Lucy came back well from the previous day with a 4,1,2 whilst Hugo/James set about their task with 7,4,1. Alex and Steffi Orton weren’t going to keep quiet though and chipped in with their own 2,2,5. Peter/James Curtis were the experienced team on the block and even they suffered if the start wasn’t spot on and notched up a score in the teens in the second race.

Elsewhere Cathy Lear/Francine Counsell were also having a great time and local heroes Robert/Emma Loveridge were keeping everyone honest. Sadly Eilidh/Vikki were having a bit of a mare. Ruth/Tess Allan weren’t about to be bossed about and Libby Watkins/Abbie Heathcote rediscovered their training form with a new, more relaxed attitude.

So it came down to the final two races. Alice/Lucy kept the coolest head (just) to take the overall win by a single point from Hugo/James. Alex/Steffi were only one point further back! Top 3 covered by 2 points.

Peter/James Curtis kept cosy 6 points further back whilst Cathy/Francine capped a fantastic day for Oakham School and Rutland Water by claiming 5th. Robert/Emma Loveridge finished a fantastic year for Draycote Water in being first home boat in 6th. They took the main Fat Face prizes whilst further ‘traveller’ awards went to Hawkins/Thomas, ‘Most improved over the weekend’ to Watkins/Heathcote, ‘Best endurance and determination on windy Saturday’ to Summers/Peel,

The closeness of the racing is epitomized by the 7th to 12th finishes with all 6 boats covered by 5 points. With 2 boats from Restronguet, 2 from deepest Yorkshire, 2 from Kent, a dash from West Mersea and the usual from the Chichester Harbour areas (apologies to Queen Mary, Hill Head, Shropshire, Felixstowe, etc) this event is truly national. Thus many thanks to the hosts for their huge effort to make it all so fun and efficient for all.

The RS Feva & Tera fleet who also held their Inland Champs at the weekend contributed to a Sail4cancer raffle. Over £250 was raised on behalf of former Feva sailor Holly Tucker who is bravely battling leukemia. Many thanks to all who contributed & well done to Rebecca Anthony who won a days coaching from Jonathan Lewis (National Squad Coach no less!). Thank you all. 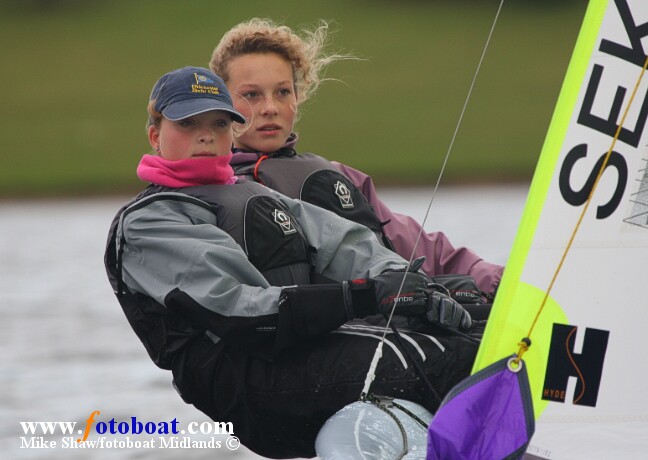 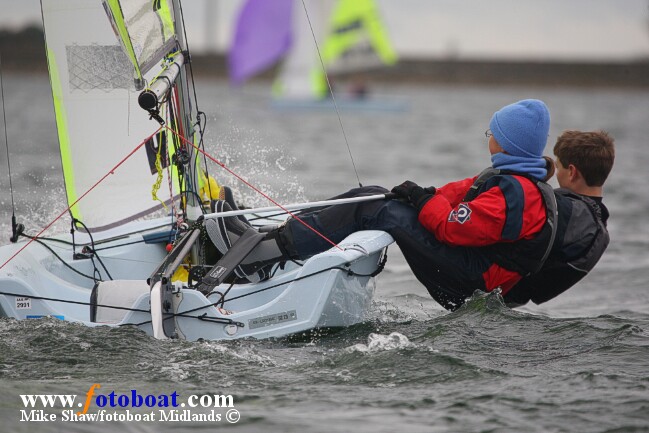