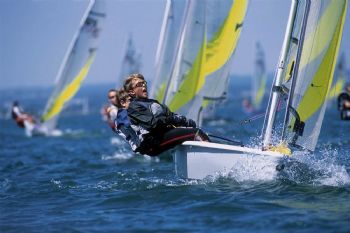 The RS Feva class attracted a stunning entry of 51 boats for the inaugural National Championships held at Hayling Island SC at the beginning of August.

7 races were held both inside the harbour and out in Hayling bay. In it’s first year the RS Feva has attracted a fantastic mix of competitor, from the undoubted young stars of our sport to families hitting the race track for the first time.

With very little pecking order existing in the class, there was a great air of expectation over the first few races, and no one expected the domination that unfolded. No strangers to winning races however, team GBR Optimist sailors Ben and Tim Saxton from Grafham Water SC walked away worthy victors. Counting five wins and a third, and discarding a fifth in the last race, these 13 yr old twins had lifted the first Feva Championship with a race to spare.

Second place ended up a tussle between HISC sailors Alec Henry / Henry Maxfield, and Sophie Weguelin / Imogen Stanley from Lymington. The local boys were ultra consistent throughout, counting 2,2,3,4,4,5, getting the better of the girls on the last day. Sophie and Imogen , counting 1,2,4,4,5,6, at least had the satisfaction of a win in race four, in the stongest breeze, maybe 12-14 knots, which produced a stunning tussle with 5 boats crossing the line in 5 seconds!

Fourth place overall went to local harbour sailors Frances Peters and Olivia Pettit. Recovering from 3 mediocre results to start with, Frances and Olivia ended the regatta with 4,3,3,1, enjoying a comfortable margin to win the last.

Of special note was the performance of leading juniors James Peters, still only 10, and Peter Henry (12) who scored 2,3,4,4,9,12, for fifth overall. James and Peter, from HISC, have not yet enjoyed the benefits of RYA or Optimist squad training, and are a great example for those keen youngsters practicing at local clubs, and no doubt a force to be reckoned with in future years.

In sixth overall, and undoubtedly disappointed with their result, were South zone Champs winners Maria Stanley and Hannah Diamond. Maria, fresh from coming 8th at the Optimist Girls Europeans and Hannah must surely have been one of the favourites, but scored 2,6,6,8,9,13.

Winners of the family prize were Sam and Caroline Maxfield, in 7th overall. 420 helm Sam stepped into to helm for his less experienced mother, but lacked consistency in the light after top scoring 2,3,3 on the Saturday. He was guarded when questioned about his mothers prowess on the kite halliard!

Five of the 51 boats were sailed singlehanded, and the leading boat here was class coach Lana Driscoll, who concluded that a Jib was a key boatspeed accessory! In future the class will consider a separate start for the singlehanded main / spinnaker option. Interesting statistics are that the average age of the top 7 was 14, and exactly a third of the boats included an adult. Crew weights in the top ten varied from 76kg to 110 kg in this predominantly light regatta. The class looks forward to some class coaching through the autumn, and the Inlands at Grafham in September.