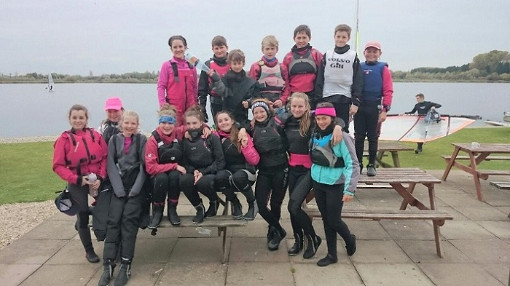 16 sailors worked hard, played hard and definitely had a whole lot of fun at the inaugural SW Winter training camp held at Bowmoor this weekend.

The brief given to coaches Bex Partridge and Charlie Makepeace was a tough one – to help the sailors have fun, learn something and bond as a team – but by using innovative exercises and team games they did just that.  The most popular exercise of the weekend was probably the pirate game, where shrieks could be heard from the shore and one sailor commented “my crew was in hysterics in the bottom of the boat, laughing so much he couldn’t sail!”

Another new experience for most of the sailors was a points race, which kept everyone close together on the race course despite a range of experience levels and resulted in lots of 720 and 360 practise and subsequent discussion on the

Most efficient way to do these penalties.

We organised these training camps last year, aimed at new Feva racers, but they proved so popular and effective that many zone and NJS boats chose to join in too. To cater for this broad experience range this year we have recruited two coaches.

Bex Partridge is in her 3rd year coaching the Welsh RS Feva squad and has solid background sailing double-handers and asymmetrics.  She was Mirror Junior National Squad, then sailed 420’s as a youth and has since sailed many classes including a great deal of RS200 sailing which she continues to do and thoroughly enjoys. Alongside her is Charlie Makepeace, best known for his team racing coaching, recently returned from representing BUSA as part of the British Universities Sailing Team who triumphed over the US Inter-Collegiate Sailing Association in the pinnacle of University Sailing.

The next weekend camp will be hosted by Royal Torbay yacht Club on 5th/6th December and will include a social on Saturday night to help the sailors get to know each other better.  Following on from that there will be weekends at Bristol Corinthian and Chew.