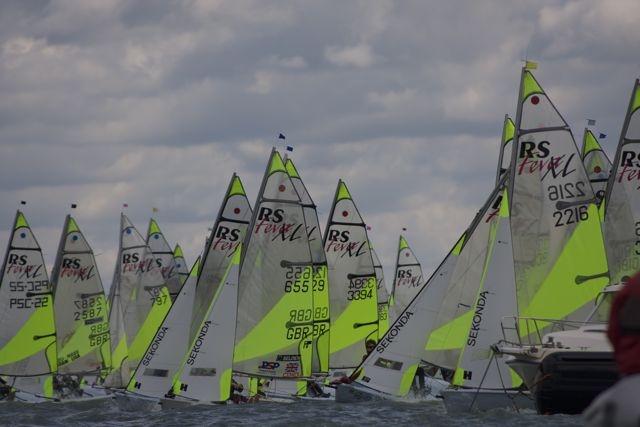 Robert Baddeley and James Taylor win the title in a superb come from behind display. But that is only part of the story of the tightest finish in years. They took it on countback from evergreen Team Kernow – Jack Hawkins and Chris Thomas. Robert Baddeley decided at the prize giving that discretion was the better part of valour and let James Taylor do the honours with the microphone. In a mature speech he repeated what the boys had already privately said. But we’ll come to that…

The final day dawned sunny and much windier than forecast. Sadly the clouds came in and the idea of a good thermal breeze was squashed. But would it die before it let 3 races be run? This was important as three races were needed to get any discard from the Final Series Gold & Silver Fleet racing. The wind proved to be quite shifty and there was some over eagerness on the line causing more time to be swallowed up. Bev Moss’s (PRO) nerves must have been as shredded as those of the leading contenders going into the final day. Different reasons of course but just as vital. Rob & James came into the day on 15 points and something special was needed to salvage this one. Queue the mood music…

There was this whooshing noise as the two from Burghfield and Wraysbury Lake sent up plumes of spray as they disappeared over the horizon. OK, well not quite plumes but it was pretty much a horizon job. After that first race smart money was still on Tim & Jack Johnson as they had added a second to their hold over score of 2 from the qualifying series. Q’series winners Rob & Emma Loveridge had a tough 11th so still in the hunt but now hunting rather than being hunted. Jack and Milli Parkin continued to show impressive form by adding a 5th to their to the carried over 11th. Jack Hawkins & Chris Thomas added a 6th to their 5th and were also right in there. Meanwhile, Marshall & Robbie King were still needing that good result after being slightly off the pace in 12th to add to the 3rd.

The next race was softer but still fair going. Baddeley & Taylor were ‘slow’ to the top mark. They knew they needed to nail some more places to get to the podium. Those ahead opened the door by going to high on the reach to the outer loop. No smaller invitation was ever more gratefully received. It turned out to be the Championship winning move. Score another 1st but ever so much closer. Score 17pts . Could anyone pip the two chargers? Jack & Milli Parkin got 2nd so made it close with 19. Ruth & Tess Allan came 3rd – total only 29 though so out of the overall choccies due to a hard won 19th in the previous race. Still leading girls though. That made a big difference to Marshall & Robbie though as their 4th gave a total 19 and behind the Parkins on countback so far. 5th was a brilliant Robert Masterman & Suzy Peters who had scraped into gold in the last available place! So,so tough though (is that allowed to have those two words so close together?) on Team Kernow as integral parts Jack Hawkins & Chris Thomas were 6th –total 17 and behind Robert & James on countback. Still, one more race to go and that could throw something very different as discards would also close in…

But that is when it go even tougher on the Silver Fleet. With such hot racers having failed to make the cut this was a very serious competition to win. Will Acres & Ed Bowman were closing in on win in the second race of the day to take the lead in the series. They got agonisingly close to the finish line in the failing wind but never quite made it. Abandoned for the poor sods leaving them still 7th. Gutted.

So both fleets were sent ashore and racing was wrapped up. In the Gold Fleet it took a tie break to separate Robert Baddeley & James Taylor from Jack Hawkins& Chris Thomas. It also took a tie break to separate 3rd and 4th with Jack & Milli Parkin taking it from Marshal & Robbie King. When results are studied it is normal for consistency to win. By that criteria Team Kernow should have had it. The only boat to have scored everything under 6th and indeed all top 10 results. Everybody else had at least one pants result. But that was to reckon without final day brilliance.

Unfortunately, there was a scoring issue that didn’t come to final resolution until after the Prize Giving. I felt for Tom Mitchell & Oliver Scott from Docklands SC as it was genuinely believed that they had scored an amazing win in the Silver Fleet. Sadly it turned out that there had been an error with a recorded result miscorrected. They would have been wonderful winners… but weren’t on this occasion. The next time! 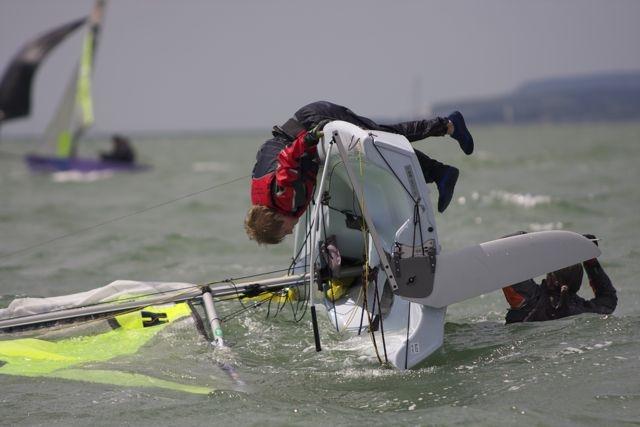 So the other awards?: The Black Bin Bag award went to Matt Whitfield and Gareth Viner for having the most consistent series of anyone – 4 black flags out of 5 races! Oh and yes, he won the other one. The real award was 1 of 5 sets of generous English Braid full set of top quality Feva Ropes. Another of these sets of ropes went to Enrico Maccaferri and Matteo Soccarola who won the top overseas performance (Italy and 17th as you ask). Rob & Emma Loveridge also won a rope kit prize as Q’ series winners as did the Boys & Ladies Champions. Many thanks to English Braid for those prizes.

So much more to tell but you’ll have to look on the blog for all that. So thanks to Penny Carter for the superb on the water judging and protest hearing (+2 ashore! Roger and Hugo), Dave Nicholls for keeping everyone safe (+ a heavenly host of helpers), the registration ladies, Tally keepers, and HISC as all round wonderful hosts and organisers. Sekonda we couldn’t do without off course and this was their 4th year with us – we much appreciate such long term, loyal sponsorship particularly in this last year or so! I know that not all helpers got a full thank you at the prizegiving and I apologise for that. Finger trouble on the thank you list was to blame. Hope you all enjoyed it and can warm the cockles of your hearts in the knowledge you all made this superb event possible. Thank You!