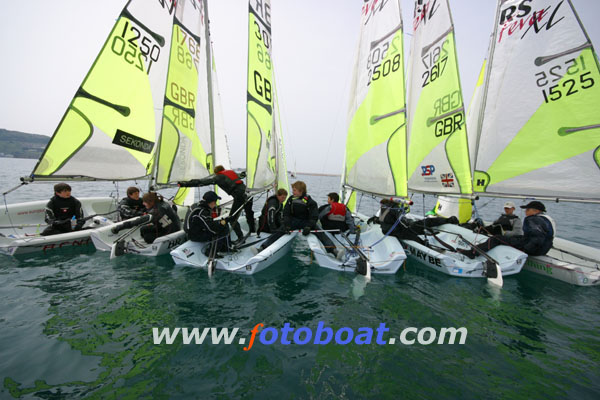 The day dawned perfectly. 15 – 20 knots and not a concern about the slight rain. The whiff of adrenaline was in the air… or was it the full English breakfast for long-lasting energy – (sorry the coaches may be reading this – porridge and orange juice!). The heavier sailors were looking for revenge after the mugging they had received from the talented but relatively inexperienced (in Feva terms) lightweights. Whilst a number in the current pecking order had survived well the results sheet was looking decidedly odd. Credit where its due though and you don’t get to the front of a nationals fleet without performing in the conditions facing you.

So for some it was drysuits on, most in wetsuits with extra protection, and head out for the 10 o’clock adrenaline fest. That was when IT happened. The sun appeared the day grew hot, the wind dropped and despite some valiant attempts by Arky and Team, the stopper was firmly shoved back in the adrenaline bottle. After two hours Arky sent the sailors ashore to get out of drysuits, drink a load of fluids and generally chill.

Now chilling is something Feva sailors do well. So much so that the occasional PA reminder was required to remind ever so subtly that certain activities surrounding youthful mayhem were actually slightly frowned upon. It was at this time that one of the major events of the day occurred. Sophie Williams’ dad Neil was out, cycling in the glorious Dorset countryside when a bump jumped into the way of his bike. At slow speed Neil hit the deck and, but for his helmet, would have been close to brown bread. Helmet completely mangled but his saviour! Arm not looking good though so he and wife Kate (both doctors) went to the local accident department and life being what is ended up with Kate sewing Neil up. Got to say that after the initial reports it was brilliant to see him back in one piece later on, Moral of this story? Wear your helmets! It’s not just high speed crashes that are dangerous…

Anyway, back to yachting related matters. There wasn’t any – yet – but with a last start deadline of 4pm approaching a zephyr was detected. The Zephyr not only stayed but build up to a whacking 4-6 knots. The GBR ISAF worlds youth squad was able to chase the wind around the harbour and get some useful practice in (nice one Steve (Irish) – coach – for getting it on!). So 72 Fevas launched (actually it was 71 as one of the Guernsey boats had the clarity of foresight and cleared of for an early ferry!). Game on but no prospect of unstoppering the adrenaline – lightweights had smiles breaking out all over the place!

The fleet stuck at it, the race officer stuck at it, the spectators stuck at it, the live tracking was stuck at it, Aeolius though must have been at the ambrosial nectar ( look that one up kids – two different references in that one!). I believe that 3 separate race courses were set in the last hour before the end but each time the wind shifted between 90 and 180 degrees. So having tried really hard, and everyone from sailors to race officials team to parents been incredibly patient, the results from the previous day were going to stand save for the one undecided protest.

A slight delay to the prizegiving occurred as a result of the protest being heard but there was a fairly timely departure for most. So what of the weekend? General impressions first and then a run down of the winners.

The sailing was light but the results had to be fair on balance for the conditions that prevailed. You had to feel sorry for the boats that dipped out for no fault of their own like Ollie Cooper & Callum Ellis (there were of course others but one example should suffice). They suffered badly from there not being a discard in the gold series, as they had been hooked between shroud and mast by the boom of an over-optimistic interloper at the start of the only gold fleet race and taken a while to untangle. The miscreants very fairly accepted their wrong very quickly and went and did their turns. For the poor old victims though the way to the front, from their unexpected and undeserved position, was blocked by the conditions and distance lost. So having qualified in 6th place or so, 20th overall was the final position.

The venue was positively as close as you could get to mid spring Mediterranean as it is possible to get in this country. With the fantastic new paved area and slip ways in front of the hangar, with the balconies allowing for gentle relaxation, with the Fireballs doing their second day of gentle boat bumbling it was more Monaco or Barcelona than Dorset!

The socials were awesome – not all of the socialising was organised but the BBQ was perfectly splendid, the chucking balls around was athletic, the being towed on two scooters simultaneously was death defying, I must have missed the unicycle special, the Wii was great but the biscuit was taken by the 6 radio controlled cars that had the racecourse set out inside the hangar absolutely humming. Simply brilliant Jon – thank you. We can always rely on Jon’s lateral thinking to give us the most amazing fun.

A little farewell then before the end. Tim & Chris won’t be back other than perhaps occasionally as assistant coaches so good luck to both of them with Tim being first up at the 420 worlds the same week as the Feva Europeans on the same lake! I don’t think Libby Watkins and Abbie Heathcote are able to make Garda so a 15th overall is a nice way to bow out – go for it girls! Meg Fletcher & Hannah Eskritt are I think going on to RS200’s at Scaling Dam and up north – have fun! But I think we’ll be seeing more of all others yet – so till next time!

Many, many thanks to all those helpers and sponsors who made it all possible, Sekonda Watches in particular and David Merriman for saying some gracious words and handing out the prizes.

There were some dark satanic mills in operation though known as rumour mills. These are never worth listening to but to set any records straight that need setting straight here we go. It is true that, as every year, we review training after the Squad training season finishes (last weekend for those not in the know). It is true that the RYA support our efforts. It is true that we have applied to the RYA to look at our class status in the Junior training world. It is true that we are in discussions with the RYA about our training and how we might improve it even more given that our training has improved on an annual basis since we first doing squad training and is now as good as any going. It is true that we are seeking to improve even more, yet again. It is NOT true that any decisions have as yet been made. But it is true that when decisions are made as to how we can improve you will all be amongst the first to know as I am incredibly proud of what and how we do things and I’ll be wanting, as ever to shout from the roof tops about any improvements we can make. Until we have come to those decisions though, please do not listen to any rumours though as I can guarantee that as far as Feva Training is concerned – they are all guesses. We do hope to have been able to have made decisions by the HISC Grand Prix meeting but I hope that I’m not holding myself as a hostage to fortune by saying that.