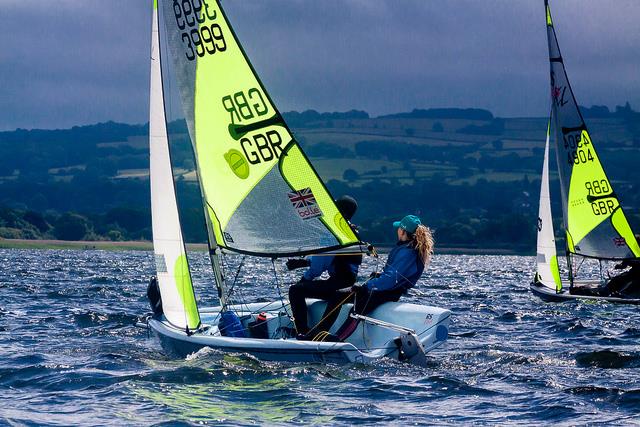 The next stop for the RS Feva Grand Prix series was the Tokio Marine HCC Inland Championships at the picturesque Chew Valley Lake near Bristol.  The weekend weather was forecast to be excellent with plenty of wind forecast on both days, slightly less on Sunday.

And so it was; the sailors on Saturday were greeted with a relatively strong South Westerly and by the time the first warning signal was sounded, at a relatively civilised 12.00, there were white horses beginning to form.  First boat out of the blocks was Ben Hutton-Penman this weekend sailing with little Archie Kemp (Corinthian Otters), they were followed home by Ralph Neville (Frensham Pond) who had poached star crew Rupert Jameson (HISC) for the weekend and then third young Alice Davis and Alistair Brown (Great Moor Sailing Club).

As the wind started to build, the bigger sailors started to really fly.  Race 2 saw a switch at the front with Ralph and Rupert taking the win from Ben and Archie with Robbie McDonald and Teddy Ferguson (HISC/Windermere School) in third.  For the final race of the day Ben and Archie got the better of Ralph and Rupert with sister/brother act Becky and William Caiger (Sevenoaks School) switching roles for this event and coming third.

So at the end of the first day Ben and Archie led, followed closely by Ralph and Rupert with a very consistent young Alice and Alistair 3rd.  It is also worth pointing out that the rest of the top six were made up on girl combos with Ching Wong and Eleanor O’Leary fourth, Sophie Dennis and Olivia Bracey-Davies fifth and Katheryn Byrne and Ellie Rush sixth.

Sunday dawned with a lighter breeze that was forecast to build during the day, four races were scheduled.  Race one saw a real swap around at the front with Robbie and Teddy taking a clear win from the ever consistent Alice and Alistair and local boys Quinn Edmonds and Fin Oliver (Chew Valley Sailing Club) in an excellent third.  The second race of the day saw Ben and Archie recover from a mid fleet first race to win with a fantastic second for Ching and Eleanor and Ralph and Rupert third.  Races three and four were dominated by three boats who finished in the same order in both races, Ben and Archie winning followed by Ralph and Rupert with Alice and Alistair third.

The top boats were consistent all weekend and the final count saw Ben and Archie crowned RS Feva Inland Champions with a net score of five point from five counting races, they were closely followed home by Ralph and Rupert on nine points and a very impressive third for Alice and Alistair on fifteen points.  Robbie and Teddy finished fourth and top girls were Ching and Eleanor in fifth, who have certainly put their fear of windy sailing firmly behind them.  Our Endeavour prize, and they also won the most smiles prize from the race officer, were Megan Rhodes and Hugh Wylam.

Another fantastic event and a huge thank you to Race Office Robert, coordinator Nick Edmonds and all the very willing helpers at Chew Valley Sailing Club who made us feel so welcome.  Thank you also to our sponsors Tokio Marine HCC.  And finally another huge well done to all our sailors who, once again, impressed the race team with their polite, happy and celebratory nature that was mentioned in the prize giving by the Race Officer and is so nice to hear.

A big shout also goes to Sue Ormerod, Toby Atherton and the 29er class association who brought down a 29er on Saturday and ran a talk on transition including a boat set up talk.  Judging by the queue of children and all the questions, and this was after a long afternoon on the water, I think the 29er class will be seeing a number of our older children transition this year and next.

Next stop is Grafham Water on the 7th/8th July and then the Europeans at Weymouth in August.  If you fancy taking part in competitive fleet racing held in a spirit of friendship and fun then come and join the Feva Class.