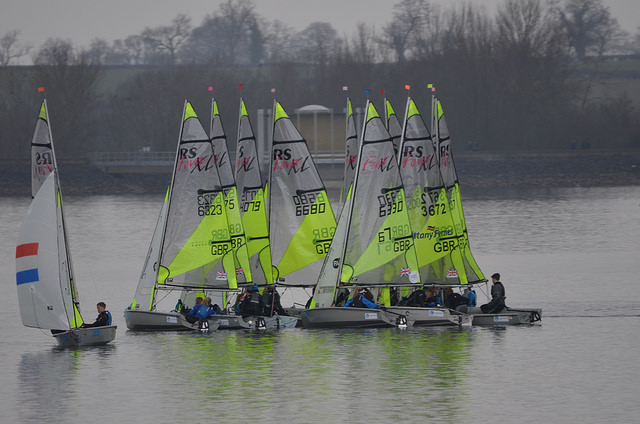 An excellent turnout of 62 boats but a forecast of very light conditions all weekend looked like it would be difficult for both the sailors and race Committee alike! Spotting the shifts and the puffs was certainly the order of the weekend and it has to be said that the consistency is shown at the front of the fleet just showed it could be done!

Saturday arrival saw zephyrs across Draycote water and an inevitable postponement for an hour or so whilst the wind filled in a little. In the end, the fleet launched just after lunch but only one race was possible as the wind weakened again. Very worthy winners of race one were the now renowned light weather specialists Tom Storey and Rupert Jameson (Yorkshire Dales Sailing Club/Hayling Island Sailing Club) but following them home in a fantastic second place was RS Tera duo Tom Ahlheid and Tom Stratton-Brown (Frensham Pond Sailing Club) and with Blake and Brett Tudor (Brightlingsea Sailing Club) a great third.

Day two saw the sailors lose an hour of sleep for British Summer Time and another hour because the race officer decided an earlier start was required to make the best of the more favourable forecast and an attempt to get five races in. And whilst everyone duly turned up on time and were greeted with a better breeze, the breeze remained fickle all day and in the end only three further races were possible.

It has to be said that day two was dominated by three boats who pretty much commanded the top three places in all the races. The first race of the day was won in brilliant style by Gabby Clifton and Daisy Weston (Dabchicks Sailing Club) who were taking part in their first Feva event having been sailing in Optimists, they certainly showed the Feva fleet what they are capable of and had a significant lead. Second place went to Robbie McDonald and Teddy Ferguson (HISC/Windermere School) and third to Tom and Rupert. The second race of the day saw the same top three but a slightly different order but with a twist. Tom and Rupert were again worthy winners followed home by another great result from Gabby and Daisy. Third across the line was Ben Hutton-Penman and Abi Jayasekara (Corinthian Otters), only to find they had been black flagged at the start and so promoting Robbie and Teddy. The third and (as it turned out to be) final race saw Ben and Abi put the previous race disappointment behind them to win, in second were Robbie and Teddy and third Gabby and Daisy.

One final race was attempted but had to be stopped 20 seconds before the start and so four races and one discard saw Tom and Rupert crowned very worthy RS Feva Spring Champions on five points, they were chased very hard by second place and first girls Gabby and Daisy, who sailed an inspired second day and certainly are pairing to watch, and the ever consistent Robbie and Teddy in 3rd. Winners of the Endeavour Trophy for working hard all weekend were Callum Fraser and Stephen Carty (Burnham Sailing Club) and also a very well done to RS Tera sailors Tom Ahlheid and Tom Stratton-Brown for an excellent 5th place overall in their first Feva Regatta.

We would like to thank Tokio Marine HCC for sponsoring the event and providing the children with great Teeshirts and very important whistles (please keep these safe and read the SIs in the future!!). We would also like to thank Richard Pye and the race team for all their efforts and the whole Draycote team for making us feel so welcome.

Next event stops are the RS Sprint Championships on 22nd April followed by our Third Grand Prix on the 28/29th April at Queen Mary Sailing Club. Please also remember to get booked in for the Nationals at the end of May at Weymouth and Portland, it will be a great event so spread the word and get all your friends along. Charter boats are available and we are looking for a record entry.

And finally, good luck to our lucky UK sailors off to Florida for the World Championships over Easter, let’s hope we will be celebrating with a UK World Champion in a couple of weeks time.