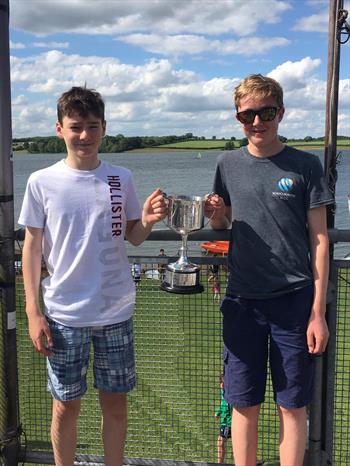 120 sailors descended on Rutland Water for the 2019 RS Feva Inland National Championships. The sailors saw varying conditions throughout the weekend ranging from flat calm to fairly blustery. With Saturday’s temperatures reaching 28 degrees celsius the race took place over a weekend that included one of the hottest days in England so far this year.

Race 1 proved to be very shifty with pressure bands coming down both the left and the right side of the course. However, although it was their first time sailing together, Felix Stewart and crew Liam Farrell were not fazed by the tricky conditions and led the race almost from start to finish. Tom Ahlheid and Tom Stratton-Brown had a tight battle with Alice Davis and Abby Hire with the Toms narrowly clinching second place at the finish line.

The second race was dominated by Freddie Fisher and Gregan Bergman Smith, followed by Millie Irish and Tass Green in second. After two more races in the heat everyone was was rewarded by some well earned ice lollies!

With the variable conditions, places were traded all the time and the top ten overall positions switched around throughout the two days of racing. During the championship, there were many different boats who won a race, including Phoebe Peters and and Rachel Pyke. Many of those who were in their element were inland sailors who were experienced in sailing in shifty conditions. Out of the top five the only coastal sailors were Blake and Brett Tudor.

It was unknown who had won the championship right up until the end. The whole competition went down to the last race, with Tom and Tom needing to be within four places of Ralph and Kate Nevile and to be ahead of Millie and Tass as well as Alice and Abby. Midway through the race Ralph and Kate were 10 boats ahead but in the last two legs Tom and Tom charged through the fleet to end up being just two places behind Ralph and Kate, to win the Championship! Millie and Tass from Draycote came third overall, just beating Alice and Abby on countback. It was a good weekend for Frensham Pond Sailing Club as the Toms won the Championship while the Nevile siblings came second, concluding this great regatta – great sailing, great weather, great fun!