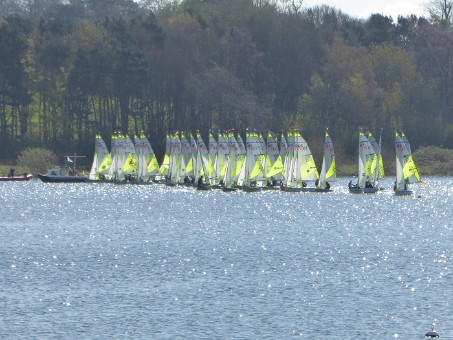 The first Volvo Grand Prix event of 2016, 3rd of the series took place at Northampton Sailing Club on 16th and 17th April. 54 teams from across the country came together for what was set to be a great 2 days of racing. Tales of snow blizzards on the journey to the sailing club but not so much as a snowdrop was seen at Northampton SC!

The race team quickly got the fleet away for race 1 in very shifty and challenging conditions, Daniel Lewis and Kathryn Byne lead the race only to get caught on the run by Henry and Jamie Rastrick who then went on to win the race followed by Daniel and Kathryn and Ossian Bracegirdle and Josh Bonsey in third.

Race 2 took some time to get away with the wind fickle and shifting Freddie Peters and Louis Johnson lead with Jack Lewis and Lucas Marshall 2nd and Tom Callan and Toby Mizzi in third.

Race three and the wind became more consistent, following on from race 2 we saw Freddie Peters and Louis Johnson lead to take a very convincing win with the Rastrick brothers in 2nd and Rory Odell and Lucy Hewitson in 3rd.

With improving conditions and an uncertain and very light forecast for Sunday, the decision was made to go for a 4th race. Lauren Bentley and Jack Miller took a race 4 win followed by Henry and Rupert Jameson and finishing the day with a 3rd Freddie Peters and Louis Johnson. This put Freddie and Louis as the overnight leaders.

Sunday came with beautiful sunshine but not much wind! The race team managed to get the first race off, during the 3 lap race the top 3 places changed throughout the race with patchy wind throughout the course, it was William Caiger and Caitlin Morley taking the win with Jack Lewis and Lucas Marshall close behind and Freddie Peters and Louis Johnson in third.

Race 6 proved to be an impossible task with the race team trying their hardest to set the course only to see the winds shift time and time again. It was clear to all that race 6 was not to be and the fleet sent back to shore to pack away and head home.

Freddie Peters and Louis Johnson sailed a flawless series discarding a 6th place from Saturday to take the overall win, with the event having a changing top 5 in pretty much every race this showed real consistency in the most challenging of conditions.

Our thanks Go to the race team Miles Odell and Andrew Bonsey, the fabulous catering team and Neil Barford, Ian Castle and Sam for a fabulous weekend

A big thank you must also go to our very generous Sponsors, Volvo who support the class and sailors in a variety of ways, this weekend 3 lucky winners had a Volvo V40 delivered to their homes complete with a full tank of fuel, tow bar and extra number plate so that they could drive to Northampton SC in style, the car will then be collected on the Tuesday after the event. We know sailing can be expensive and know that this helps to make a difference.

Your exclusive Affinity offers await. As a valued member of the scheme, you’re entitled to a host of fantastic, exclusive offers across the  Volvo Range. To see what these are at the moment, simply take a look here – http://affinity.volvocarcorporation.com/partners/8YUb43 .

We will be drawing names from the entry list to award the use of a Volvo for the PA RS Feva National Championships over the coming weeks so get your entries in to give your self a chance.

The RS Feva Class are also very fortunate to have the support and valuable sponsorship from Magic Marine UK who provide prizes for events.