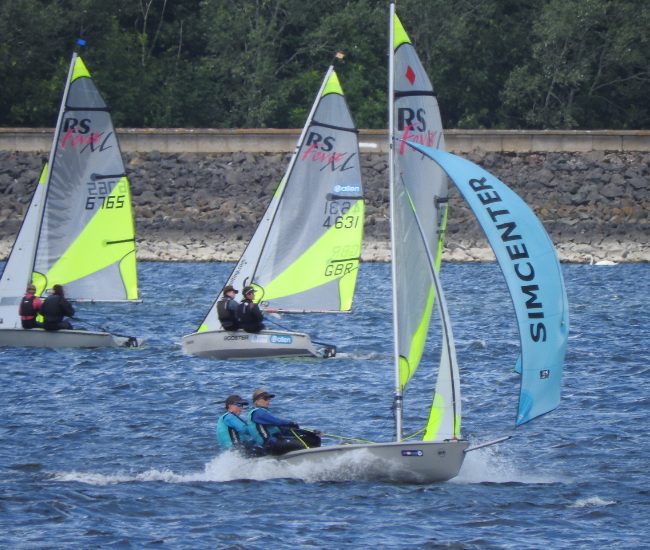 Sunny and warm conditions greeted 31 keen young Feva sailors from across the country for the last
of the 2021/22 Grand Prix series, also counting as the Inland Championships for 2022.
Unfortunately, the wind hadn’t read the same script, and despite being warm and sunny, the whole
weekend saw consistent strong winds with frequent gusts into the high 20’s.

These conditions quickly split the fleet into those that loved the conditions and had the experience
to really let the boat fly, and those that were just happy to get around the race course relatively dry.

Race officer Matt Rowley had looked at the worsening weather forecast and decided to get 5 races in
on day 1 using a simple windward / leeward course, with a further 3 on Sunday, this meant it was
going to be a long hard first day for the sailors. Despite this all the sailors did a great job of sticking it
out through most of the day, although the use of a spreader mark on the windward mark did catch a
number of sailors out in the first race.

The overall results for the weekend were dominated by 2 boats with Freddie Sunderland &amp; Stella
Nygard (Draycote Water SC) just getting the better overall over Katie and Bob Byne (Draycote Water
SC), with these 2 between them accounting for 7 race wins out of the 8. On the Sunday in the
slightly stronger winds Freddie and Stella showed the rest of the fleet how to really get a Feva to fly
downwind with 3 straight wins.

In a close battle for third Maya Bergman Smith and Emilia Ripley (Hayling Island SC) just got ahead of
Mark Jenkins Jauma and Alex Sydenham (Royal Lymington YC / HISC) for 3rd and 4th respectively. Hot
on their heels were Imogen Green and Felicity Angell (Draycote Water SC) for 5th and Samuel and
Isabelle Tonks (HISC) for 6th .

In the overall series prizes, where consistency pays dividends the story was similar, with three of the
top five from the Inlands taking the overall, but in quite a different order. Mark Jenkins Jauma and
Alex Sydenham took the series overall by never having to count an overall round worse than 3rd , and
only 1 point behind overall was Maya Bergman Smith and Emilia Ripley. 3rd place could have gone to
any one of 4 boats leading into the final round, but was taken by Imogen Green and Felicity Angell.