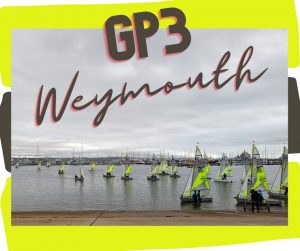 The start of the Winter Championships at WPNSA saw some familiar faces, new sailors and a number of school entries making up an amazing 38 boats out on the water. The weekend was filled with challenging conditions which the sailors embraced!

The mood on Saturday morning was calm and sailors were eager to get out and race with the hope the wind would not fade away. The racing was shifty with the odd gust rippling along the otherwise glassy water, but the race officer set a fantastic course and it was a tactical maze.

Race one had Marc and Alex claiming first position, second and third positions were very close. Sirène and Amelia (newcomers to the circuit) made their presence known by taking second place and on their tail was Imogen and Felicity in third. Race two saw Marc and Alex knocking out another first position, Felicity and Imogen claiming second and Holly and Ella coming in third. Another boat joined the fleet in time for race three but Marc and Alex were going for a triple win and came away at the end of day one with three 1st’s, second place was Holly and Ella and after a delayed morning Tristan and Finlay claimed third place in race three.

Sunday morning came, there was a bustle of sailors preparing their boats for completely different wind conditions.. Shrouds were tensioned and masts were raked in readiness for some big wind racing.  Sails were wildly flapping and off the sailors launched.

Disaster struck for the Golden Duo, before the start of race four Mark and Alex’s gooseneck failed, (supposedly due to the lack of their lucky watch) causing them to limp back to shore putting them out of the running. The dolphins came to play and while their large dorsal fins were temporarily being mistaken for sharks, they raced the Fevas up the beat taking particular interest in Maya Bergmann-Smith and Emilia Ripley.

Tristan and Finlay were on a mission after missing some races the day before, they got a first in race four followed by Kitty and Lily in second and third place was taken by Sam and Andrey. During race five it remained breezy gusting over 30 knots. From the shore you could see several boats sending it downwind with their kites while others were playing it safe, going for a more direct course downwind. Tristan and Finlay took first place again, Holly and Ella were there in second and Freddie and Thomas claimed third position.

Tristan Ahlheid and Finlay Lomas-Clarke ruled the waves on Sunday, with a flat boat and supersonic downwind speed, but with a DNC to count they were out of the running a podium finish. This left the podium positions for the consistent girl teams who despite not having a bullet between them made up the top four boats. It was all to play for going into the last race.

Only 18 boats started the final race showing how full on the conditions were, and that anyone who launched should be proud to have made it out there.. Tristan and Finlay got their triple win of the day, in second place was Kitty and Lily and in third place was Maya and Emilia. 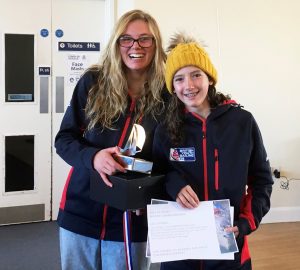 The overall positions for the GP3 had 6th place going to Toby Lumb and Richard Millet from Tonbridge School, 5th place went to Freddie Callaghan and Thomas Roy from Royal Southern YC. Imogen Green and Felicity Angell from Draycote Sailing Club came away in 4th after an unlucky U-flag in the final race. Maya Bergmann-Smith and Lily Ripley from HISC took 3rd with 2nd place going to Kitty O’Halloran and Lily O’Halloran from St Mawes. The crowned winners by only 1 point were Holly Mitchell and Ella Jones from Hayling Island Sailing Club.

Finally thanks to the race team, WPSNA , Lucy for doing an amazing job as our Class Secretary over the years and Chrissie who will taking over the position. (sorry I dropped the trophy!)

Words by Holly Mitchell and Chrissie